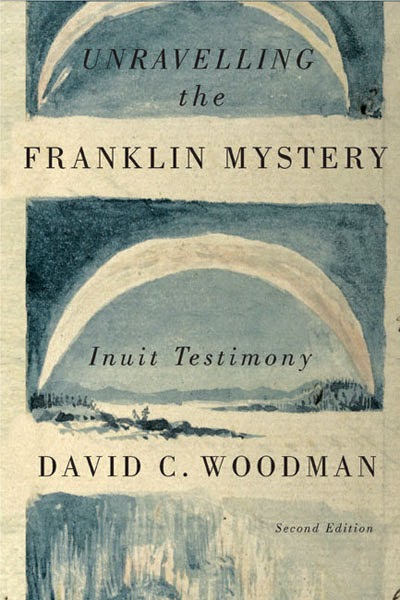 
It's the single most significant book in the history of the search for Sir John Franklin's long-lost ships and men, one without which, arguably, Parks Canada's 2014 discovery of HMS "Erebus" would never have been possible. And yet it's a book that relatively few, aside from the true Franklinomanes, have read, read recently, or read with care. And so it's extraordinarily welcome news that McGil-Queen's University Press has seen fit to bring out this new paperback edition, just in time for those who have only recently contracted Franklin fever to apply its sobering salve to their heated brows.

The text of the book is essentially unmodified from its first edition -- but, as Woodman explains in his thoughtful and informative preface, that's because -- aside from one or two relatively minor points he addresses there -- the testimony he's collected and analyzed still stands, and has been proven entirely accurate in every instance where it's been possible to corroborate it with physical evidence.

Those -- such as latter-day Franklin biographer Andrew Lambert -- who have depracated Inuit oral testimony as somehow flawed, somehow unreliable, simply do not understand it, and would do well to read this book with more care. In a pre-literature culture, oral stories function quite a bit differently than they do in a literate one; Plato was entirely correct when he warned against the use of alphabetic script, saying that it would lead to the weakening of the human faculty of memory:


If men learn this, it will implant forgetfulness in their souls; they will cease to exercise memory because they rely on that which is written, calling things to remembrance no longer from within themselves, but by means of external marks. What you have discovered is a recipe not for memory, but for reminder.

And it's true: any historian worth her or his salt knows that written accounts are hardly immune to errors of transmission,  promulgated through copying, miscopying, and misquoting, and how faith in the truth of the printed word can misguide readers. We should think, then, of the oral-traditional period as one in which the memory, indeed, was stronger, more methodical, and more robust -- because it had to be. For the Inuit, who were still living in the oral age two millennia after the Greeks, their survival depended on it. Where was a good place to fish in the fall? Where were seals found last year? The year before? The last year in which the sea-ice was thicker than usual? Where, in case of need, were one's old food caches, on which one had to depend when game was scarce?

That these strangers came among them, thus, was something which the Inuit recalled with tremendous detail and remarkable consistency. Those Inuit who spoke to McClintock, to Rae, to Hall, and to Schwatka told their stories with great care, always noting whether they had personally witnessed the events or were passing on accounts from others. They named all present at the time as witnesses, and these names were remembered even when, generations later, Knud Rasmussen spoke to the sons and grandsons of the hunters who had told their tales in the 1860's and 1870's. Indeed, as Dorothy Eber has shown, many of the essential elements of this tradition were still recalled by elders well into the 1990's, although by then decades of settlement life, satellite television, and sedentary existence had dulled some details.

In his introduction, Woodman points clearly to the ways in which the Inuit testimony has been proven accurate: the Inuit testified that some of Franklin's men resorted to cannibalism, which has now been verified by forensic studies by Beattie, Keenleyside, and others. The Inuit led white men searching for Franklin to the bones of his men, to the places where their boats and camps had been, without error, a tradition that has continued up through to Louie Kamookak today. And, most significantly, the Inuit testimony consistently indicated the area where one of Franklin's ships had sunk, the spring after a winter during which they had visited the vessel, near an island in water shallow enough that the masts still showed above the surface. Without knowing the precise location, we can easily see that this account, which placed the ship near an island in Wilmot & Crampton Bay, has been proven entirely accurate.

This Inuit testimony, long ignored, was collected and collated by Woodman, who managed to sift through multiple accounts by multiple witnesses, accounts in which certain details varied, or dates and place-names were ambiguous (local bands of Inuit often gave names to familiar places which turned out to be identical to those used for other places by other bands). It was a tremendous labor, and it's no discredit to the original Inuit witnesses to say that, without Woodman's work, it would have been very difficult indeed to make much use of it.

That said, Unravelling remains a challenging read. One has the sense, even on the second or third time around, of having stumbled into a rabbit-hole of what are, initially at least, confusingly overlapping and interconnected accounts. Woodman organizes the material as clearly as possible, but even he can't avoid doubling back and forth a bit in his search to re-connect loose or missing ends. Which makes his book even more valuable, in that, even for those who think they know these tales, Woodman stimulates a careful reconsideration, a probing mind, and -- it can't be helped -- the tendency to form theories of one's own.

Woodman graciously acknowledges this, and offers insightful reflections on the developments -- the birth of the public Internet chief among them -- which have augmented what we know, even as they have, inevitably, re-muddied some of what had seemed clear waters.

A few days ago, the Royal Canadian Geographical Society gave out a newly-designed "Erebus medal," presenting 220 of them to those whose work contributed to the 2014 find. And yet, that list could readily have been shortened by about 219 -- for, without the work of David C. Woodman, there would almost certainly have been nothing to celebrate. His is one of the greatest achievements of amateur historians, whose love of mystery causes them to revisit that which the world of written reference falsely believes to have been solved. And, for those still fascinated by the Franklin story, there is good news: it still isn't.
Posted by Russell Potter at 9:40 AM