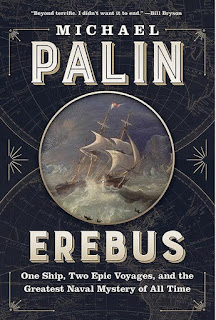 Erebus: One Ship, Two Epic Voyages, and the Greatest Naval Mystery of All Time


In the past century and a half, dozens of books have been published dealing with the lost Franklin Expedition but only a few have stood the test of time—springing to mind are Richard Cyriax’s magisterial Sir John Franklin’s Last Arctic Expedition and David Woodman’s examination of the Inuit testimony, Unravelling the Franklin Mystery. Many are stylistically dated or poorly written or just plain weird, but for anyone wanting to add to the corpus of Franklin literature today, there is a much more dangerous pitfall—time.

As Michael Palin puts it in Erebus, after Lieutenant Schwatka’s return from his exploration of King William Island in 1880, “The indignation that fuelled the search, the wounded national pride that gave it such imperative, and the appetite of newspapers…for the grisly details had all diminished. There was a palpable sense of closure.” The skeleton of the story was known in as much detail as was possible, the memorialization could progress and for a century little was discovered to disturb the narrative. As Canada’s national interest in the Arctic grew in the second half of the 20th century, so the mystery of Franklin’s fate revived, fuelled by Owen Beattie’s work on the bodies buried at Beechey Island and the politics of sovereignty. Then the lost ships were discovered, Erebus in 2014 and Terror two years later. Suddenly, the risk of almost anything written about the Franklin disaster becoming outdated or being proven wrong overnight mushroomed. The hundreds of artifacts and the possibility of written records preserved in the cold water offer the chance of discovering more about the expedition at one fell swoop than many lifetimes of dedicated researching have previously done.

Palin’s book is not -- at least yet -- dated; it is very well written and only weird where the author wishes it to be. Most importantly, Palin cunningly sidesteps the issue of having his book undermined by the next dive on the wrecks: instead of focussing on the expedition, Palin gives us a biography of one of the ships.

After a short introduction with a title that could be out of Monty Python—"Hooker’s Stockings"—Palin gets down to business with a concise section outlining the construction of HMS Erebus in the Pembroke dockyards in Wales and the development of British interest in the ends of the earth after the Napoleonic wars. We learn about the early expeditions and through this are introduced to the two main characters in the Erebus story, James Clark Ross and John Franklin. The rest of the book is divided into two sections covering Erebus’s two great voyages: Ross’ four year exploration of the Antarctic and Franklin’s tragic attempt to transit the Northwest Passage. On both occasions she was accompanied by Terror under the command of Ross’ close friend Francis Rawdon Moira Crozier.

In 1839, Ross set off for the Antarctic. After replenishing in Van Diemen’s Land (Tasmania), where John Franklin was Lieutenant Governor, they set off to explore Antartica. Over the following four years, the expedition mapped much of the continent’s coastline, located the south magnetic pole, named an active volcano Erebus, catalogued a plethora of animals and enough plants to provide the assistant surgeon, Joseph Hooker (he of the introductory stockings), with the 3,000 specimens that provided the basis for his classic six volumes of Flora Antarctica.

Ross’ expedition in Erebus and Terror was one of the great voyages of exploration—seventy years later Roald Amundsen said of it, “With two ponderous craft…these men sailed right into the heart of the pack [ice], which all previous explorers had regarded as certain death ... These men were heroes…in the highest sense of the word.” Palin’s judicious use of diaries and letters brings the voyage and the participants alive. It becomes almost a running gag as the Erebus’ Surgeon, Robert  McCormick catalogues the animals he slaughters on each trip ashore. Of course, that was his job and Palin gives him due credit for his love of nature and for his evocative prose, for example, his description of a penguin, “walking away upright as a dart… looking like an old monk going to mass.”

Palin, too, holds his own in vivid prose as when the expedition finally turns away from the ice and heads north: “More than a year of their three and a half years away had been spent in or near the most inhospitable continent on earth, with no relief from the relentless cold and no human contact of any kind, other than those men squeezed together on the two ships that carried them into this wilderness. And here they were, for a third season, grasping frozen lines with frozen hands, soaked to the skin, clinging to the rigging as the ships pitched and tossed and icebergs three times higher than their masthead loomed out of the darkness. And Cape Town still 2,500 miles away.”

Palin repeats his achievement in his use of letters from the participants of Erebus’ final voyage, in particular, James Fitzjames’ long letter home from Greenland. Fitzjames was third in command and captain of Erebus on Franklin’s attempt to sail through the Northwest Passage in 1845. He writes lightly and entertainingly, particularly in the pen-portraits of his fellow officers which Palin has dug out from the unpublished version of the letter—Stephen Stanley, Surgeon on the Erebus is described as, “…rather inclined to be good-looking, but fat, with jet black hair, very white hands, which are always abominably clean. and the shirt sleeves tucked up; giving one unpleasant ideas that he would not mind cutting one’s leg off immediately, if not sooner.”

Of course, unless legible letters or diaries are found in the wrecks of Erebus and Terror, Palin has nothing else to work with after the ships sailed from Greenland. Fortunately, Jane Franklin wrote letters to her missing husband and to anyone she felt could be of use in searching for him, however, the most moving work comes from much farther down the social scale. John Diggle was a veteran of Ross’ venture and signed on as cook on the Terror. After he had been gone for almost three years, his father wrote a letter to John to be taken on one of the many relief expeditions. He said, “I write these few lines to you in hopes to find you and all your shipmates in both ships well…” He then talks about his worry that his son is frozen in and in danger from scurvy. He concludes, “Dear son I conclude with our unbounded gratitude to you, your loving father and mother John and Phoebe Diggle.” The letter came back stamped “Returned to sender, There Having Been No Means of Forwarding It.”

Using Erebus as a structure for outlining British Polar exploration in the first half of the nineteenth century in general and Ross and Franklin’s exploits in particular is a wonderful idea and few could have carried it out as well as Michael Palin. His prose is lively and readable and he has an eye for the telling, unusual or odd detail and in the writings of McCormick, Fitzjames and others has some splendid material to work with. Palin has also visited many of the places important to the Erebus story, from what little remains of the dock where she was built and the dock she sailed from on her last voyage, to the Falkland Islands, Tasmania and the Canadian Arctic. This allows his travel-writer voice to come through and gives a modern, first-hand sense of the places her crew must have stared at in wonder.

There is not much in Erebus that will come as new to Franklin or polar exploration aficionados but there are snippets, such as that Ross wanted Fitzjames to come with him to the Antarctic as Gunnery Lieutenant but he was not available. Yet however much the reader knows of the background, Erebus is still a fascinating, readable account. For those with little knowledge but an interest tweaked by the recent discoveries, there are few better places to get a start.
Posted by Russell Potter at 8:08 AM No comments: