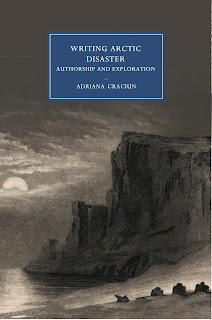 In the wake of the renewed interest in the history of the Franklin expedition and those who searched for it, we are beginning to see two different  -- yet complementary -- phenomena: First, a fresh effort to better understand what went wrong, and with it why the search still inspires such passionate feeling; and second, an emerging body of scholarship that points the way to a more critical consideration of the larger mythos of Franklin, and of Arctic exploration generally. Adriana Craciun's Writing Arctic Disaster is, as it were, the flagship of this second fleet, gathering together recent scholarly work and using it as the foundation for a reconsideration of the old myths and counter-myths that have, at times, trapped scholarly perspectives in an icy tomb just as unchanging and sterile as the graves of Franklin's men on Beechey Island. Sartain's engraving of these graves, based on a watercolor by James Hamilton (based in turn on a sketch by Dr. Elisha Kent Kane), fittingly appears on the cover of this new study.

Craciun opens her book with a reference to Nietzsche's (in)famous consideration of historiography, in which he distinguishes three sorts of history: the monumental, the archaeological, and the critical. Each, in its extremes, has its flaws: the monumental 'leaps from mountain-top to mountain-top,' often missing the complexities of the valleys in its urge to hammer out a race of heroes; the archaeological can get lost in minutiæ, becoming only the 'restless raking-together of everything that has been thought and said.' It's the last sort -- the critical -- 'history which judges, and condemns' -- that Craciun seeks to pursue, though not to such an extent that it damages the previous two (Nietzsche's prescription, after all, was for a balance of all three forms).

Craciun argues that, for too long, we have experienced the Franklin story, along with others of explorers in extremis, in a manner rather too similar to that of our Victorian forebears. Like them, we read the explorers' original narratives, letting the woodcuts and engravings with which they were illustrated carry us north on imaginary wings; like them, we dote over relics, seeking amidst spoons and eyeglasses the vital clues which might solve it all; like them, we take it for granted that exploration is a vital human impulse, as old as time, and dating back to the first moment that the earliest women and men wondered what was over the next hill.

She's right, of course. And so, as a remedy to this head-ache of anachronistic proportions, she alternately applies the salve of the archaeological and the sharp astringency of the critical, both to good effect. The enmeshment of exploration in the culture of print, and in the nineteenth-century's vast expansions of literacy and utility, is aptly observed; drawing here upon work such as Janice Cavell's Tracing the Connected Narrative, as well as upon the theoretical work of de Certeau and Foucault, she gives us, as it were, a genealogy of the fascination with Arctic disaster.

Her first chapter, "Arctic Archives: Victorian Relics, Sites, Collections," is the most exemplary of these; where others have seen the Franklin relics mainly as clues in a detective story about loss, she emphasizes their ambiguity, uncertainty, and hybridity:


Beginning with the earliest collections of Franklin disaster debris, not only the message but the relics themselves were indistinct and unstable artifacts verging on ecofacts, further losing ontological cohesion and categorical integrity as searches proliferated more objects and they in turn more questions.

As instances of this, she notes the many items that had been repurposed by Inuit, some still showing the maker's marks of their British manufacturers; here was the Empire not merely ended, but mended, turned to native purposes and verging on the sort of anthropological artifaction that might attend a Kwakiutl mask or a Samoan spear. Each new search, of course, added to this store, but this accumulation of relics failed to clear up the mystery, offering instead only a "broken syntax" that could never be assembled into a coherent sentence.

The chapter following takes a step further back in time, to Franklin's first land expedition, which -- with its resulting narrative, published as were to be nearly all others, in a quarto edition by John Murray -- she sees as the cornerstone of what she calls 'polar print culture.' She includes Mary Shelley's Frankenstein among these texts, and demonstrates how, in one sense, Franklin's failure in his first foray was shadowed by his "perpetual disappointment with the land's bewildering resistance to [his] aesthetic expectations." And yet, in the end, the illustrated edition of his narrative reiterated those expectations, omitting to depict those incidents of starvation and cannibalism beside which boot-eating was merely a minor sin.

Chapters 3 & 4 take us further back still, to the era prior to Barrow's flurry of Naval expeditions, when gentleman adventurers (the latter a word which originally referred to the venturing of capital, not lives) first sailed into uncharted waters. The central section of this chapter offers a critical account of James Knight's prior Arctic disaster. Knight, of course, was looking for copper, and so his demise pre-dates the ideology of the disinterested scientific 'explorer,' but it certainly laid some of the foundation. These chapters also feature some quite remarkable images, both of the elaborate manuscripts that the Hudson's Bay men prepared, and their inscriptions upon stone, each of which with their bold serifs seemed almost willing to claim pre-eminence by letterform alone.

Of more particular interest to those who approach this book with a Franklin fascination, Chapter 5 offers a fresh consideration of Frobisher's voyages, along with Hall's recovery of relics from sites identified by the Baffin Island Inuit. Many have dismissed Hall's discoveries there, and as Craciun notes, the items he brought back had "none of the photogenic and affective power of the personal effects and scientific instruments found by the Franklin searches." Nevertheless, they formed an important connection, what she calls the 'rediscovery' of early modern voyages, that dovetailed perfectly with the emergent interest in writing the backstory of exploration, and of establishments such as the Hakluyt Society.

The book concludes with an epilogue in which Craciun turns her critical faculties upon what she calls the "twenty-first century reinvention of Franklin's legacy." Much of it, including the support of the former Harper government and petrochemical companies, she views dimly, seeing a sad admixture of "Imperial nostalgia" and a return to a new, yet no less false monumental sense of history. There's certainly some truth to this, but I don't agree with her that the Franklin story is, ultimately, a distraction (though if so, 'tis a pleasant one). As an embodiment of the ultimate question of why we explore -- past, present, and future -- Franklin's disaster seems to me to offer a stark reminder of risk, rather than a rear-view mirror of lionization. And it's that element of willing risk -- of lives, of time, of materiel -- that is, in the end, the vital part of discovery. Still, Craciun is right to remind us that that word -- discovery -- along with (ad)venture -- is always in danger of being collapsed back into a merely capitalistic exercise. In both senses, it's a cautionary tale.

NB: The book is printed in a large octavo format, on moderately high-surface paper, which shows the numerous well-reproduced illustrations to good effect. Cambridge University Press, so far, has made this book available only as a hardcover priced for the library market at $120, with a Kindle version available for $70. While the academic language of the book may initially pose a challenge for some readers, the book is nevertheless of broad interest, and it's to be hoped that, before too long, an affordable trade paperback will be made available, or the price of the e-book reduced.
Posted by Russell Potter at 1:29 PM No comments: