A Wretched and Precarious Situation 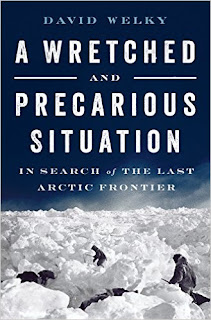 A Wretched and Precarious Situation: In Search of the Last Arctic Frontier


In late June of 1906 Robert Peary stood on a mountain top on Ellesmere Island and surveyed Nansen Sound, still ice-covered, to the west, and beyond it a land that he called Jesup’s Land, which we know today as Axel Heiberg Island. And to the northwest? Much later he wrote, “… northwest it was with a thrill that my glasses revealed the faint white summits of a distant land…”

A few days later, having crossed Nansen Sound with his two guides, Iggiannguaq and Ulloriaq, he climbed Cape Thomas Hubbard. From there, he later wrote, “… with the glasses I could make out apparently a little more distinctly, the snow-clad summits of the distant land in the north-west, above the ice horizon…. in fancy I trod its shores and climbed its summits, even though I knew that that pleasure could be only for another in another season.”

In 1913, another expedition left the United States, bound for northwestern Greenland. Two young men, George Borup and Donald MacMillan, were to have been its co-leaders, but Borup drowned accidentally in Long Island Sound some months before the expedition’s departure. In 1908-09 both had been tenderfeet on Peary’s last expedition, in which he claimed to have reached the North Pole. Both worshipped Peary. They knew that he would never return to the Arctic. But even before their return to America, they determined that they would come back – together they would find Crocker Land. The pleasure of “another in another season” would be theirs. After Borup’s untimely death, the mantle of leadership for the expedition they had planned, sponsored in the main by the American Museum of Natural History, fell on MacMillan.

David Welky, a historian with the University of Central Alabama, has written a history of the Crocker Land Expedition. A Wretched and Precarious Situation: In Search of the Last Arctic Frontier is a welcome, indeed long-overdue, contribution to Arctic history. At 502 pages, it is an exhaustive (but not exhausting) look at the expedition, its successes (few) and failings (many).

MacMillan’s expedition was planned to last two years. For some of its participants, it lasted four; others managed to leave the Arctic after three. MacMillan’s personal failure happened in the first year of the expedition. In the spring of 1914 he and Fitzhugh Green, an ensign in the United States Navy, crossed Ellesmere Island by way of Beitstad Fiord, then sledded north up Eureka and Nansen sounds to Cape Thomas Hubbard on Axel Heiberg Island, from where Peary had claimed his second sighting of Crocker Land almost eight years earlier. Accompanied by two experienced Inuit, Piugaattoq and Ittukusuk, they travelled northwest over the ice surface. On April 21, MacMillan sighted his goal, a huge island, complete with “hills, valleys, snow-capped peaks extending through at least one hundred and twenty degrees of the horizon.” He was ecstatic.

But there was nothing there. Piugaattoq told him it was nothing but pujoq – mist. MacMillan couldn’t believe him. For five days, they chased their phantom island – perhaps a continent – over increasingly dangerous sea ice. But finally MacMillan conceded defeat. “My dreams of the last four years were merely dreams, my hopes had ended in bitter disappointment,” he wrote. It was a “will-o’-the-wisp, ever receding, ever changing, ever beckoning.” He had been tricked by an Arctic mirage, a deceit of the atmospheric conditions of springtime and the shifting sea ice. Crocker Land was an illusion.

Welky delves deep into the origins of the Crocker Land myth. Peary, it turns out, had made no mention of his sighting of land to the northwest of Axel Heiberg Island in his diary entries made at the time, nor in the cairn records he left on site. Nor did he mention it on his return to New York, not even at a meeting of the Peary Arctic Club in December of 1906, at which George Crocker was in attendance. And not even in the draft of his book, Nearest the Pole. The name makes its first appearance in the published version of that book, and even there it does not appear in the text, but only on the accompanying map. The text, and that of a magazine article published at about the same time, refers only to the “faint white summits” and “snow-clad summits” of the distant land. What was Peary’s motivation in deciding, sometime between writing the draft and the final text of the book, that he would claim to have seen land far out in the Arctic sea? Simply this: His 1906-7 expedition was a disaster that had produced no tangible results, but he would need some result in order to secure funds for yet another expedition. Welky concludes, as have many others, that Peary was not averse to lying. He had “lied about reaching Greenland’s north shore” in 1892, and he was lying again when he “… saw a fata morgana…” and should have known that he was witnessing a mirage. “Nothing worth writing about in his cache notes or diary, but convincing enough to inspire a story about new land,” writes Welky. “Then he inserted the remarkable tale into his book in order to raise money.”

Welky sums up MacMillan’s (and Borup’s) belief in their mentor succinctly: “Crocker Land was an illusion that grew into a lie that took on a life of its own. Borup and MacMillan turned the lie into a dream…” But even in defeat, MacMillan maintained his belief in Peary. Welky writes, “When Crocker Land evaporated, he was convinced that the Arctic had deceived Peary, not that Peary had deceived him.”

The Crocker Land Expedition shattered more than MacMillan’s dream. One participant was, or became, a madman who literally got away with murder. This was Fitzhugh Green, scientist and would-be poet, who was the only white man with MacMillan on the actual search for Crocker Land. On the return leg, the two men took separate routes, each travelling with his own guide along the shores of Axel Heiberg Island. During a storm, Green misunderstood the actions of his guide, Piugaattoq, who forced the American to walk behind the sled to keep his toes from freezing. Green complained that he could not keep up, but Piugaattoq knew that keeping a steady pace was imperative. Green, feeling that his guide was abandoning him, shot the man, recording matter-of-factly in his journal, “I shot once in the air. He did not stop. I then killed him with a shot through the shoulder and another through the head.” Green confessed his deed to MacMillan. He was never charged nor punished. But the other white men of the expedition learned of it, and it drove a wedge through the camp.

All this within the first year. During the rest of the expedition, MacMillan managed to do some surveying, and Ekblaw made some heroic trips. But the early camaraderie disintegrated after the murder of Piugaatoq, and MacMillan proved himself an ineffective leader. One might expect the rest of the book to be anticlimactic, as it might well have been in the hands of a less skillful author. But Welky is a superb writer, and he mines the interpersonal relationships of the expedition’s participants – the loyalties, the friendships grown or torn asunder, the cultural insensitivities – as effectively as he describes the travel, the exploration into unknown territory, and the constant flirtation with death at the hands of the elements.

A less skilled author might have been tempted to focus on the heroism of the search for Crocker Land – for a journey over unpredictable ice in often-blizzard conditions, whether the objective is reached or not, or real or not, is heroism nonetheless and makes a compelling tale – and then relegate the denouement to a final chapter or two. But Welky has not taken this easy way out. He unwinds the expedition as meticulously as he had set it up. MacMillan’s party does not even reach northwestern Greenland until page 134 of this book – the author sets the stage for the expedition, its inspiration, the administrivia of its organization, the backgrounds of its personnel, in considerable detail. Similarly, he meticulously documents the last two years of the expedition, a stay in northern Greenland prolonged by the failure of relief ships to arrive or even be seaworthy. One bright point in what for some participants was a time of despair and boredom was MacMillan’s trip of pure exploration with only Inuit companions to the unknown region west of Axel Heiberg Island.

The illustrations for this book are well-chosen. One map shows the area and most of the relevant place names, but the reader might have benefited by the inclusion of more maps with more detail of the 1914 Crocker Land attempt and MacMillan’s 1916 journey. Welky has wisely avoided the use of the out-dated word Eskimo in his text, opting instead for the self-designation of the people of northwestern Greenland, the word Inughuit; this is a plural word, a variant of the more general Inuit, and the singular form for both is Inuk. But it can be a daunting task for the writer who does not speak Inuktun, the language of the Polar Inuit, to keep this nomenclature straight. On occasion Welky slips up and refers to “an Inughuit” or “a true Inughuit” – an impossibility – but is generally consistent in using Inuk as the singular form. In a footnote on page 461, he is in unfamiliar territory when he refers to McClure’s abandoned ship, Investigator, providing the Inughuit with a source of metal; but these were people in the western Canadian Arctic, who do not describe themselves as Inughuit – the proper term should simply be Inuit. He also uses the term Polar Inuit in reference to the people once known as Polar Eskimos. Welky has consistently used the spelling Battle Harbor for the telegraph station on the Labrador coast, but this is incorrect for it is an official place name and should be spelled in the Canadian manner as Battle Harbour. But these are minor quibbles in a book this good.

As the long centennial of the Crocker Land Expedition finally draws to a close in 2017, a reading of A Wretched and Precarious Situation would be an appropriate way to celebrate this little-known and much-misunderstood expedition.
Posted by Russell Potter at 8:05 AM No comments: