Interview with the author, Dominique Fortier 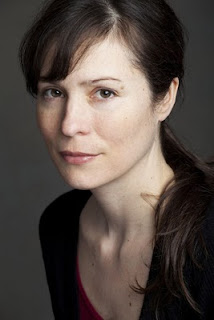 Russell Potter: I've read that your initial interest in the Franklin story came from the NOVA broadcast, in which I was a presenter. So, as you can imagine, I'm curious as to which scenes or sequences from this program lingered most in your mind?

Dominique Fortier: At first, I was just blown away to see the Terror and the Erebus prisoners of a sea of white and to learn that more than a hundred men had stayed there and managed to survive for almost three years. I remember pausing the TV and calling to my fiancé, asking him if he’d ever heard about that expedition. (He hadn’t either; I gather we are not the only ones in Québec not to have known of it). But there is one image in particular that stuck with me the whole time I was writing the book: that of the men, hungry, thinned and exhausted by the three winters spent in the ice, leaving the ships and starting to walk – towards what they must have known was their death. Nevertheless, they were hauling behind them, in boats weighing more than a ton, all kinds of trinkets: soaps, silver polish, curtain rods, the most ridiculous things … That image told, in a very powerful way, that after all they went through they still were not ready to leave England behind them… It also told both of their arrogance and of their complete ignorance of what the Arctic was like and demanded. It is because of that single image that I started to write their stories.

Russell Potter: Yes, it’s a very compelling image! I was really impressed by the breadth and detail of the historical materials you draw from in your novel. What kind of research did you do, and were there any documents or resources that turned out to be especially valuable?

Dominique Fortier: I started with Pierre Berton’s Artic Grail, about the history of the North-West Passage “conquest”, which offered a good overview, and then went on to read a number of works specifically on the Franklin expedition. I focused on those that presented factual information (log books, list of canned food on board, etc.). Among them: Frozen in Time, by Owen Beattie and John Geiger, and Iceblink, by Scott Cookman. I also read a biography of Crozier and one of lady Jane Franklin, so as to have an idea of the important events in their lives, but I didn’t want to know too much about them, because I still wanted to be able to create my own “fictional” characters. More importantly, I read journals and accounts of explorers from the time, among those the one Franklin had written about an earlier expedition (Narrative of a second expedition to the shores of the polar sea in the years 1825, 1826, and 1827), and also lots of science books written in the 1850s (on magnetism, geography, etc.), in order to try to capture the “soul” of that epoch, and hopefully to see the Arctic through nineteenth century eyes. That also helped me to find Francis Crozier’s voice, which I didn’t want to sound modern.

Russell Potter: It certainly doesn’t – in fact it seems to me pitch-perfect for both the man and the times. In fact, I’m struck by the ways in which your novel paints a rather less than complimentary portrait of such typically admired figures as Franklin and Fitzjames, while making Crozier -- who is usually portrayed as dour and disappointed -- into a more complex and compelling figure. Was this a conscious design, or did the characters just come out that way?

Dominique Fortier: It was a very deliberate choice. I didn’t want to make a hero out of Franklin (nor out of Crozier, for that matter). John Franklin is so well known and glorified that today he almost feels like a statue. So I figured it would be more interesting to have someone looking at that “statue” from the outside, in a critical but always very respectful way, since Crozier is a man of honor and he would never dare undermining the authority of his superior. Still, I felt it would make an interesting contrast to oppose Franklin’s unbridled optimism with Crozier’s doubts and uncertainties. And I wanted the reader to learn to know both of them mostly through what they say and do, not so much through analysis of their characters. In the end, Crozier is flawed, but he comes out human. At least, I hope.

Russell Potter: Your portrait of Lady Franklin also seems to me particularly vivid; how did you set about imagining her?

Dominique Fortier: She sort of imposed herself. I didn’t have a specific idea about how I wanted her to be, but as soon as I started writing about her, she was there, and it was very clear what she wanted. I would say Sophia’s character gave me more trouble, because her “motivations” are changing and in the end remain quite a mystery. But Lady Jane was a very strong woman, in a no-nonsense kind of way, she was resourceful, independent, quick to act, so I basically only had to follow her lead.

Russell Potter: I loved the use of the de Bergerac play -- were there other sources in French that you drew from or consulted? I'm curious as to whether you looked at Emile Frédéric de Bray's journals, or Jules Verne's Voyages et aventures du Capitaine Hatteras?

Dominique Fortier: I actually don’t know of de Bray’s journals (but now I have to go take a look!) and I must admit I am not a big Jules Verne fan. That may sound strange, but I would say Flaubert was an inspiration, for his irony, as well as Jane Austen (even if she is definitely not French). I chose to adapt Le Voyage dans la Lune de Cyrano de Bergerac because of a sentence found in Berton’s Grail, that I quote in the novel. Eskimos, seeing white people and their ship for the first time, ask them if they have come from the Sun of from the Moon. And I figured that, in a way, the Franklin expedition was in fact, at the time, the equivalent of going to the Moon. (By the way, I love the fact there is a crater named from Crozier on the Moon. I tried to find a way to hint to it in the novel and couldn’t… but I managed to put it in my second book.) These men lose all their bearings and find themselves in a place entirely unknown, that didn’t clearly appear on maps, as foreign as another planet would be. But Cyrano aside, I tried mostly to keep the explicit reference English (Shakespeare, Goldsmith, Austen) so as not to draw attention to the fact that it was a Francophone writing about this very British adventure.

Russell Potter: In her lecture, "Concerning Franklin and his Gallant Crew," Margaret Atwood identifies the Franklin story as a foundational myth of Canadian literature, and points to writers such as Rudy Wiebe, Mordecai Richler, and Gwendolyn MacEwen. Now that, thanks to your novel, this story has found a place both in Francophone Canadian letters and in English translation, do you think this will affect the way the Franklin myth functions for Canadians as whole?

Dominique Fortier: I’m afraid I’m not equipped to answer that question. Once I decided I would write about the Franklin expedition, I chose early on to not look at other novels on the same subject, for fear that I would just get discouraged and drop it. For the same reason, I haven’t studied the “resonance” the fiction has had or to the myth it has helped build. The only thing I can say is this: once they learn of it, Quebecers share the fascination Anglo-Canadians already have for that story and the mystery that still surrounds it.

Russell Potter: I was delighted to learn that Jean-Marc Vallée is planning a film of your novel. Will you be involved with the screenplay, and can you tell us anything else about this project?

Dominique Fortier: We are actually working on the script together, and we’re supposed to have a first draft at the end of November. It is pure joy working with him: he is an incredibly gifted screenwriter, and a very good teacher. We immediately agreed on what the movie should be about: it is a tragedy, but it also has to be a bit of a comedy; the “adventure” and discovery part is important, but, in the end, it is love story. As for production, I have no idea! Jean-Marc talked early on of trying to get financing in the UK, but we are still far from there …

Russell Potter: Many of my readers are asking when they can expect a U.S. edition, and since the Arctic Book Review reaches an international audience, I'd be interested to know about this or any foreign editions that may be in the works.

Dominique Fortier: For the moment, the book can be ordered in the U.S. via Amazon.com. I don’t know if there are going to be other editions or translations.

Russell Potter: What's your next project?

Dominique Fortier: My “day job” is to be a translator. I’m just finishing up the French translation of Linden McIntyre’s The Bishop’s Man for a Quebec publishing house. My second novel came out in French this summer; it is called Les larmes de saint Laurent (St. Lawrence Tears). It is about earthquakes, volcanoes... and is also a love story. I am now working on a third novel.