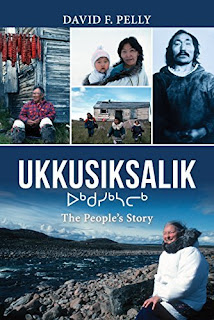 When I was in Gjoa Haven for ten days in 2004, I remember a local Inuk who, though he was happy to answer my newcomer's questions, regarded my interest in his community as a short-term one, despite my protestations to the contrary. When I asked him why, he put it plainly: many Qallunaaat say the same thing -- but then that's the last you see of them -- they never come back.

David F. Pelly is one who came back -- again and again -- and so earned the trust and the friendship of the people he sojourned among. And these qualities are vital to the  project of Ukkusiksalik, which is no less than to provide a comprehensive oral history of this area from the earliest appearance of humans to the establishment of the national park that bears its name in 2003, and beyond. Indeed, Pelly opens with an account of the geological history of the area beginning with the last Ice Age. From there, he briefly notes the presence of the Dorset people in the area, a pre-Inuit group that just barely survived until modern times; the Inuit knew them as the Tuniit.

The book then moves into the  central section, the "People's Story," which takes the form of numerous individual accounts by elders who traversed, lived in, and hunted in the region in the pre-settlement era. The oldest of these were born early in the 20th century, while the youngest were born in the early 1950's and recalled the traditional life only as children. There are a few helpful footnotes, but not much more; it's unfortunate that Pelly presents these accounts with so little context. Of course most of the Inuit are anxious to tell their own families' stories, but the overall effect is rather like being trapped in the dining room of an old folks' home for several days -- you hear a lot of names, a lot of stories, but have no way to make collective sense of them.

The subsequent sections, each with a specific theme or focus, are more accessible; of particular value are those that describe the arrival of the powerful outside forces that would soon shape Inuit life here as elsewhere: missionaries, the HBC, and the RCMP. One section, "The Search for Franklin," is of special interest; here, as recalled by Tuinnaq Kanayk Bruce, is a persistent oral tradition about the Schwatka expedition, which passed near Ukkusiksalik in 1879. Alas, much like the stories collected by Dorothy Eber in her Encounters on the Passage, the story has clearly grown tattered over the ages; it's difficult to identify any of the Inuit mentioned in the story with those named by Schwatka or Gilder in their accounts of the journey. The account does, however, reveal something of the fear and potential hostility between Schwatka's group and some of the neighboring bands, an issue glossed over in most other sources. The one member of that party who made the strongest impression was "Henry" -- doubtless Heinrich Klutschak -- who was described as "always talking loudly." The party's discovery of remains is also mentioned, though garbled; thy were said to have found money and some papers, along with a human shoulder bone in a pot -- this may be a distorted recollection of the blank paper, math medal, and bones supposed to be those of John Irving, which the expedition did bring back.

The latter part of the book includes maps of traditional trade and travel routes, and a listing of the laconic journal entries made at the small Hudson's Bay post at the site. It's all valuable material, to be sure, but its arrangement is likely to make this book a daunting read for anyone who doesn't already know something of the history of this region. As an act of simple historical preservation, it is certainly praiseworthy -- but I would rather that the author had digested this material and given us a more coherent history within which the elders' stories would have made more sense. This approach, applied with memorable success in Dorothy Eber's earlier When the Whalers were Up North, is sadly missed here.
Posted by Russell Potter at 1:40 PM No comments: