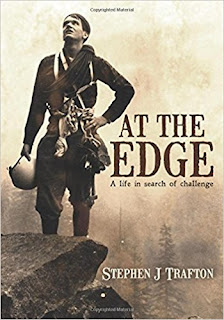 To say Stephen Trafton led an interesting life would be an understatement. His achievements are many and versatile. Climbing Boulder Peak in Washington State, at the age of twelve led to an impressive career in mountain climbing, with numerous first ascents and subsequent leadership in mountain rescue.  A college job in a bank became a professional career which peaked in taking the US government to court and so saving what became Citibank. Later in life, he discovered a passion for car racing, and there he also excelled. He set the Ferrari land speed record in a car that he restored himself, and had an impressive racing career including an unsuccessful attempt to complete the Peking to Paris Rally. His passion for exploring led him across the USA on solo hikes and by kayak and on eleven expeditions to the High Arctic. His interest in the Franklin Expedition brought him to King William Island, where on his second visit he discovered a note left by Franklin searcher Frederick Schwatka.

This, Trafton’s first book, is entitled At The Edge – A life in search of challenge and covers his adventurous life from the early beginnings in the 1940s to the present time. In the foreword, he encourages his readers to push their own boundaries and challenge themselves by walking up to their personal edge, peeking to the other side, and walking back, being proud of the achievement. For that he includes tools of self-evaluation and goal setting. He also takes us on a wild ride through his life on edges most of us wouldn’t even dream of taking on.

The first part of the book deals with his expeditions into the Arctic and stories of mountain rescue. They are not in chronological order which is not too distracting as all are stand-alone, easy to read and always entertaining chapters. You know you are in for a wild ride when in the acknowledgements Trafton apologizes to his brother for the “ice axe in the forehead incident”. Unfortunately we never find out what exactly happened but it’s a synonym for the compelling, nail-biting and often hilarious tone the book is written in.

We learn intimate details about the perils of rectal body temperature measurement for a sponsor while climbing a mountain on Ellesmere Island or doing one's business in double-digit sub-zero temperatures, not to mention spending a night in frozen sleeping bags while a polar bear sniffs out the camp. Trafton takes us on a thrilling glacier crossing where deep crevasses are hidden under fragile snow bridges that when crossed shed icicles into the abyss. We also find out how you use spit to get your bearing when buried in an avalanche. Living on the edge indeed!

A more light-hearted paragraph deals with the group arriving at the remote DEW station on KWI telling the stunned personnel that they came to sell magazines. This is not the only part that makes one chuckle while reading. If it’s practical jokes in camp, being (temporarily) declared persona non grata on Spitzbergen for messing around with Russian observers, or a photo illustrating what happens when you discuss politics in the Arctic, Stephen Trafton’s sense of humour makes the book a very enjoyable read.

For Franklin aficionados the most interesting parts of the book are without a doubt those about King William Island. Just much of an Arctic buff Trafton is himself shows in the chapters on Ellesmere Island ,when he describes how he named several of the newly ascended peaks – in true discoverer fashion – after Arctic explorers and their ships. Unfortunately, the Canadian government had other ideas and gave the mountains Inuit names instead.

For those new to the topic, Trafton provides an overview on the Franklin expedition and the subsequent searches. Even the most seasoned Franklin scholar will be fascinated by the account of how Trafton found Schwatka’s note, possibly wince a little upon reading how he fished it out of its bottle to read it, and ponder his still holding a grudge against the Prince of Wales Museum in Yellowknife for not handing it back to him after conservation. Although it was found on Canadian soil, Trafton is still convinced that, since it was written by an American explorer, it should have gone to the US. The bottle in which the note was found now is part of Trafton’s Arctic library.

The book is a handsome softcover, illustrated by clear, easy-to-read maps and numerous colour photographs. It provides an entertaining read, not only for Arctic buffs and the historically inclined, but also to anyone who just likes a good adventure story.
Posted by Russell Potter at 4:51 PM No comments: