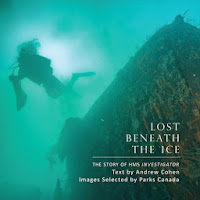 Text by Andrew Cohen, with images from Parks Canada

The story of the rediscovery of the wreck of HMS Investigator by Parks Canada in the frozen waters of Mercy Bay in July of 2010 captured the imagination of the world, and evoked the 'heroic age' of Arctic exploration in a way no other recent event has managed. In part, this is due to the way in which a ship, even in its watery grave, evokes the endeavor of exploration with far more gravity and magnificence than any recent discoveries on land have done (last summer's toothbrush, found at Erebus Bay, comes to mind). But it's also due to the fact that the Parks Canada team was uniquely positioned to undertake a thorough on-site survey of the wreck, and to transmit the news and images of their discovery via the Internet and the news media almost as they were happening. And, it should be mentioned, the chief reason that the archaeologists on the site had the kind of support and media access that they did was largely due to the predilection of the then and present Government of Canada for the symbolic significance of the Franklin expedition and those who searched for it, particularly in relation to the issue of Arctic sovereignty. This is not the place to debate the wisdom of that policy -- historians and the public must be grateful for the commitment of any kind of support to archaeological research of this kind -- but still, there is a certain irony surrounding the fact that, outside of Ryan Harris's team who features in this book, Parks Canada's archaeological staff has suffered from significant losses in funding and personnel.

That said, this is a glorious book, primarily for its beautifully-printed illustrative materials, which include many of the paintings of Lieutenant Gurney Cresswell, which until now were not readily available together, nor reproduced at such a generous scale. The original Admiralty schematics for HMS Investigator herself are also reproduced as double-page illustrations, along with images of some of the letters sent conveying the news of McClure's eventual rescue, and other materials of the day. The modern photographs, although they don't reveal new findings, are reproduced with excellent resolution, and possess a drama in the hand that's missing when the same images are viewed upon a screen. The overall quality of production is very high, and there's no other book of its kind that so dramatically evokes the hazards of Arctic navigation in the nineteenth century. I certainly can't imagine a more welcome holiday gift for any exploration buffs on one's list.

The text, alas, is somewhat less enlightening; while Andrew Cohen has exercised considerable skill in briefly recounting the voyage, the ship's imprisonment in the ice, and eventual abandonment, his lurid patches of language sometimes undercut the story's own intrinsic drama. He's more journalist than historian, which is fine insofar as the book quickly acquaints the reader, in broad strokes, with the history of Arctic exploration in Britain, the reasons the Franklin expedition was dispatched, and McClure's own role in the search for its missing ships. Those deep in the throes of what I like to call 'Franklinomania' will find nothing new, but then, the text isn't really meant for them. They will, however, find the illustrations and photographs as -- or perhaps even more -- valuable than the proverbial thousand words.
Posted by Russell Potter at 7:49 AM 1 comment: