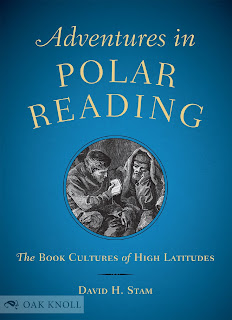 Adventures in Polar Reading: The Book Cultures of High Latitudes


Anyone with more than a passing interest in books and polar expeditions will have long been familiar with the extraordinary work of David H. Stam. He has reconstructed the catalogues of some of the world's most remote libraries, those located aboard the ships, or in the encampments, of polar expeditions. Along the way, he has also probed the social and psychological value of such remote reading, including the appetite for print which led many expeditions to produce their own books and periodicals. If we are what we read, then it would seem that explorers -- once their reference reading is set aside -- seem to have taken particular pleasure in fiction; among their most frequently cherished volumes have been Dickens's Bleak House, Goldsmith's The Vicar of Wakefield, and Charlotte Brontë's Jane Eyre (a fact which surely would have gratified its author, who as a child was fascinated with Arctic explorers).

Adventures in Polar Reading is, in physical form, an embodied curriculum vitæ of Stam's work over these past two decades, arranged so as to bring us along in his venturesome company, and partake of the pleasure of discoveries made along the way. It begins with a short recursus of Stam's fascination with his subject, sprinkled with witty asides and reflections that set the tone for what's to come. We then commence with an early reflection of his on the function of reading among historical expeditions, on the "silent friends" whose presence proved such a comfort to those denied any human company beyond their own. This flows quite perfectly into a chapter on the libraries of such expeditions; between the two, we learn of Robert Bartlett's fondness for The Rubaiyat of Omar Khayyam and how Julius Payer reveled in his library, which included Paradise Lost, Shakespeare, and "a whole tribe of romances, which were read with never-ending delight." Most poignantly, we learn that Dr. Edward Wilson (one of Scott's comrades who died with him) was reading and re-reading Tennyson's In Memoriam while on their southern march, remarking that "it makes me feel that if the end comes to me here or hereabout there will be no great time for Ory to sorrow. All will be as it is meant to be."1

In another, perhaps retroactively more sombre moment, we eavesdrop on the survivors of the Greely expedition, who in coming upon a small cache of lemons wrapped in newspapers, savored the news even more than the lemons, carefully unwrapping each one and flattening and drying the paper. In his diary, second-in-command David Brainard described the scene: "The first of a series of very pleasant entertainments took place to-night. The scraps of newspapers were read aloud for fifteen minutes by Rice [the expedition's photographer who died later on the journey] just after dinner. This will be repeated every night until all are read."

Stam's chapters are sprinkled with such revelatory gems, even as they advance the theme of polar reading in all its aspects: the battered books of Fort Conger, poignantly damaged not by Arctic conditions but by a leaky library roof in Peary's Maine estate; an accounting of the role of newspapers and periodicals in polar reading, and a detailed accounting of the "Seaman's Friend Society" and their pre-assembled libraries of self-improvement and religious tracts in duodecimo. Two of the best-known and most substantial expedition libraries then receive extensive treatment: that of Admiral Byrd at "Little America" in Antarctica, and that of Shackleton's Endurance. The volume concludes with a touching Quo Vadis? -- whither then? -- in which Stam surveys the array of thematic and research topics yet to be fully explored by polar librarians and researchers.

As is to be expected in a volume published under the auspices of the Grolier Club in New York City, Adventures in Polar Reading is a strikingly handsome volume, sturdily bound in cloth boards, and copiously illustrated. No collection of Arctic or Antarctic books worth its salt -- or, perhaps I should say, worth its ice -- should be without it.

Posted by Russell Potter at 11:30 AM No comments: