Stray Leaves from the Arctic 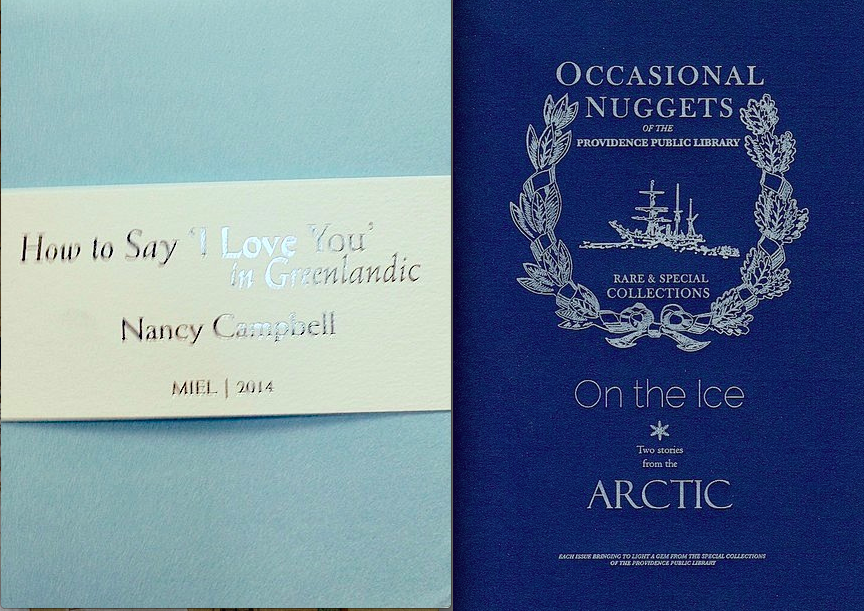 In 1852, the indefatigable Sherard Osborn -- a prolific if not always pleasant collaborator and author -- published his Stray Leaves from an Arctic Journal. The stray leaves of this review, however, are of a quite different and more visually engaging variety: a chapbook and a small volume of illustrated cards inspired by words in in the Greenlandic Inuit dialect. Both share slight dimensions and lightness of weight; they seem as though they might almost have arrived at our doorstep via message balloons like those dispatched in 1851 in the search for Sir John Franklin, or perhaps fallen out onto our desk as we opened some more ponderous tome of Arctic journeys. We can only express our delight that they have.

The first is Nancy Campbell's How to Say 'I Love You' in Greenlandic, a miniaturized version of her fine press art book of the same name. Campbell, who was a writer in residence at the Upernavik Museum in 2010, is presently the holder of the Lady Margaret Hall Visual and Performing Arts Residency at Oxford. As a printmaker and bookmaker, Campbell deftly deploys her artistry and design to create books that are not merely things of beauty, but which preserve and embody the languages, cultures, and wildlife of the Arctic regions. The change in size of this edition has a remarkable effect; though most of us imagine the Arctic as vast and panoramic, now here it is in our very hands: small, portable, vernacular. And, like the Kalaallisut language itself, it is vulnerable, beautiful, and agglomerative -- as a single word can mean a whole sentence, a single image encompasses the color and form of one of the Earth's most remote yet lovely landscapes. The cards come wrapped in a pale blue paper liner with a white band -- one could conceivably send them as postcards, though here at the ABR, we plan to keep them together, picking them up at times to let them cascade from hand to hand, or perhaps leaning them on a shelf, with a different card facing outwards each day. 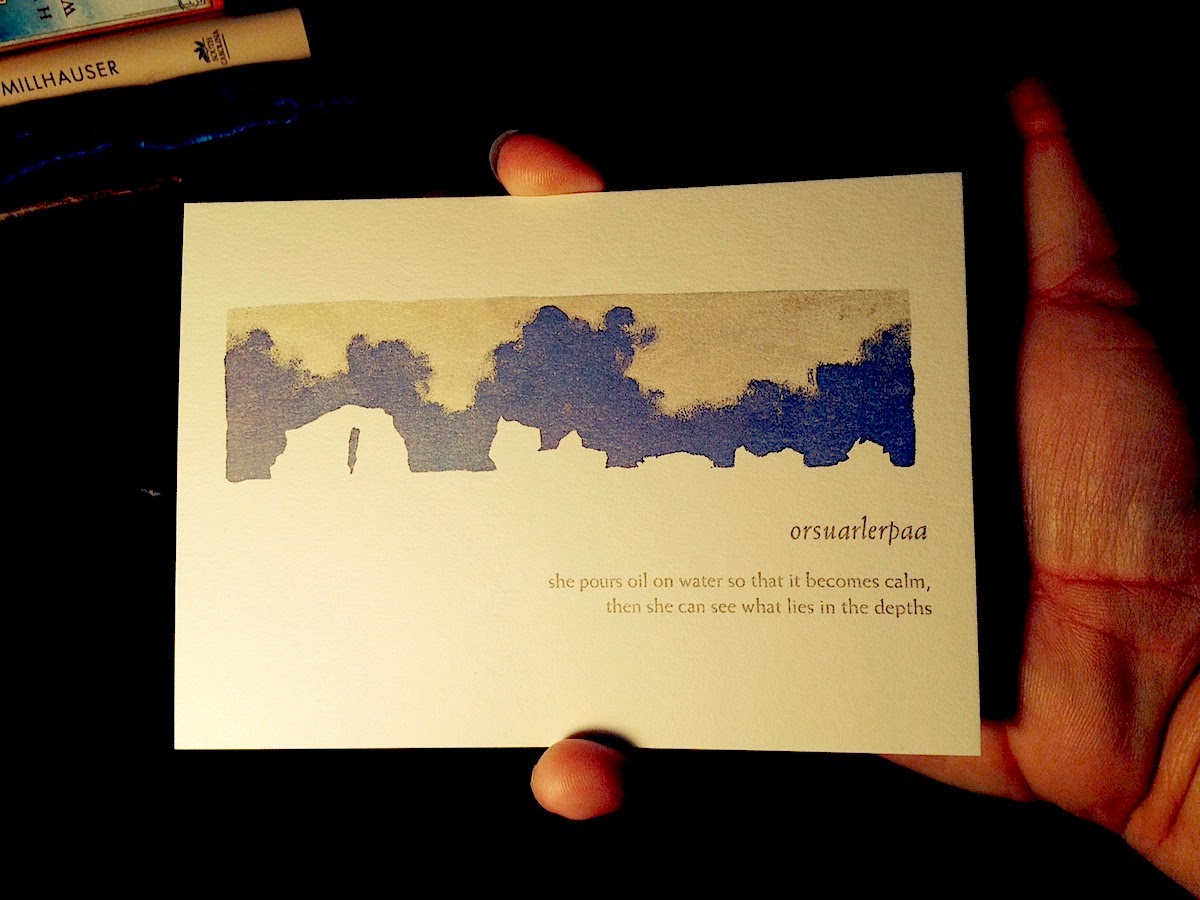 Today's word is orsualerpaa: she pours oil on water so that it becomes calm, then she can see what lies in the depths.

The second of these volumes, one of the "Occasional Nuggets" series issued right here in town by the Special Collections staff at the Providence Public Library, is entitled On the Ice: Two Stories from the Arctic. Each issue features items of interest from within their holdings, and this one has two. The first, the journal of one Nicholas Bailey, who shipped aboard the whaler Harlequin in 1768, is a relatively conventional document of its kind; the document of far greater interest is the second one. It's the journal of Roderick R. Schneider, one of the less-well-known members of the infamous Greely Expedition to Lady Franklin Bay on Ellesmere Island. Led by Adolphus Washington Greely, it set a new record for furthest north in 1881, and gathered a valuable trove of meteorological and magnetic information; these accomplishments might have made it a beacon for other polar explorers, had it not been for what followed. Following orders, Greely abandoned his northern camp at Fort Conger and retreated south, unaware that the promised caches of supplies had never been made at his destination. He and his men endured horrific hardships that reduced his original party from twenty-one men to a mere six, with dissension, starvation, and cannibalism in the mix.

Schneider was a mere enlisted man, and was chiefly known during the expedition for his skill in handling the sled dogs, a skill with which none of the party had any previous acquaintance. And yet, in the party's final struggle for survival, Schneider (along with others) was caught stealing food and rum, for which he was sternly reprimanded by Greely. He managed to survive, against all odds, and was the last to succumb, dying only four days before the survivors were finally rescued. His diary was transcribed by a member of the rescue party -- which was fortunate, as the original later went missing and was entirely lost, save for a few leaves, on a Mississippi steamboat aboard which the purloiner had brought them. It is this transcript which survives at the Library.

Both the Bailey and Schneider documents are described at length, illustrated with full-color scans of some of the more interesting leaves of their originals. They bring, each in their way, the material history of Arctic journeys, and make quite a "nugget" in combination.
Posted by Russell Potter at 2:44 PM No comments: