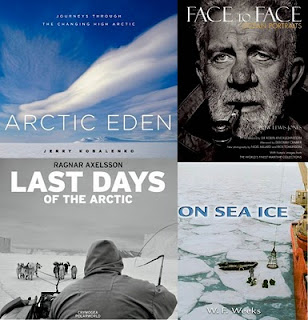 The end of the year often brings a series of oversize packages to the offices of the Arctic Book Review - 'tis the season for large-format, illustrated, and definitive tomes, and this year is no exception. And so, although we've not had time to thoroughly read and review all these titles yet, we'd like to draw our readers' attention to some of the most remarkable among these new offerings.

Not all of these books are for everyone -- W.F. Weeks's On Sea Ice is an exhaustive and technical tome, a reference for oceanographers and other scientists whose work involves sea ice (as opposed to land-bound ice and glaciers). Nevertheless, it merits mention for Dr. Weeks's eminently readable and delightful introductory chapter, "Historical Background," which offers a lively survey of the literature of Ice from ancient times, through to legends such as Scorseby and Nansen, through to the present moment.

Our other three volumes are based around photography; even for those to whom lengthy narratives of Arctic expeditions may have limited appeal, the sheer beauty of the region has the capacity to arrest any eye, as our remaining books amply demonstrate. First, we have Jerry Kobalenko's Arctic Eden; readers of the ABR may recall our review of his earlier book, The Horizontal Everest, by David Owen. As with his first volume, the text is a geographical and cultural ramble, recounting journeys from Beechey, Axel Heiberg, and Ellesmere Islands, the last of which Kobalenko has traversed from top to bottom in a series of interlinked journeys. Yet unlike his previous book, here the large format allows the photographs to star, and they do -- from the site of Sverdrup's Fram Haven to the Franklin graves at Beechey; from the remains of a cairn built by Peary and the Inuit at Cape Colgate to a striking view of polar mirages hanging over Jones Sound, there is an abundance of impressive imagery. Croker mountains, anyone?

Yet it's Ragnar Axelsson's Last Days of the Arctic which, to my mind, better captures the rich contradictions of this fascinating region, and the peril in which it presently lies. In some measure, this is simply because of Axelsson's imagery of the Inuit and Inughuit, who are visible only in the margins of Kobalenko's book; here we get a sense both of the profound isolation of many northern hamlets, and yet also their tremendous vitality, their youth, their disarming honesty. Axelsson captures a diverse array of images: a young girl in Kuumiut in East Greenland, in her best summer dress and on her way to church, making what looks like some kind of Hip-hop hand gesture to the photographer; a Inuk toddler fast asleep on a couch, while his father washes up in the adjacent bathroom (northern houses being an endless play on what can be done with less than 750 square feet of space); an old hunter, cigarette in mouth, clutching a husky pup, wearing a knit cap as he gazes out across a settlement. Amidst these, there are extended sequences of hunting trips, where traditional spears mingle with high-powered rifles, and a narwhal head makes for an excellent trophy moment. The greater part of Axelsson's images are in stark, stunning black-and-white; one can only imagine the envy that Ansel Adams and others of the ƒ64 group might feel for a land where the bright snow every day permits a depth of field rarely possible in the temperate zone. The people, and the land, come through with such stark clarity that, as with the Arctic sun itself, it is necessary sometimes to squint.

Our final book is not really an Arctic volume per se, though it includes a fair number of polar figures. Readers of the ABR will recall our notice of Dr Huw Lewis Jones's first volume in this series, Polar Portraits, two years ago; now comes its successor, Face to Face: Ocean Portraits, published (as is Axelsson's) by Polarworld. The format is parallel, as is the richness and newness of every portrait, even those that some of us may have seen before. The quality of the reproductions is magnificent, and the new photos -- many of them by the gifted photographer Nigel Millard -- are every bit their equal. Among the Arctic subjects are Lewis Gordon Pugh, "the human polar bear," seen emerging from the water at the North Pole; Henry Le Vesconte, a lieutenant on the Franklin expedition who was memorialized last year in Greenwich at an event hosted by Polarworld, attended by Robert Grenier, shown here at the rail of a Thames clipper on the evening of his talk; Sir George Nares, last of the great nineteenth-century British polar explorers; Otto Schmidt, explorer of the Soviet Arctic; John Parker, captain of the Truelove; and Sir Edward Inglefield, whose own Arctic pictures were exhibited in London in 1853. Among the other striking portraits are those of Lady Phyllis Sopwith (whose white-gloved hands upon the wheel and aristocratic angled chin practically scream "yachtswoman"); open-water swimmer Lynne Cox, quite literally in her element; rower Alex Bellini channeling the look and beard of a latter-day Rasputin; artist Dorothy Cross holding a dessicated shark's skin; and yacht restorer Elizabth Meyer, her face salted with sawdust from a current project.

As with the earlier Portraits volume, added attractions in this book include a fine essay on ocean photography past by Dr Lewis-Jones, illustrated by a wide array of striking and seldom-seen early photographs, followed by a lively discussion of present-day photography in which he's joined by Millard, Rick Tomlinson, Joni Sternbach, and David Doubilet, and a brief, beautifully-written afterward, "The Heart of the Ocean," by Deborah Cramer.

It won't be easy to choose from among these books at year's end -- and with some of them, you may need to get a bigger stocking! -- but all of us here at the Arctic Book Review wish you the pleasantest of holiday seasons, and the time and space for lots of reading!
Posted by Russell Potter at 4:20 PM No comments: