Adventure at the Dawn of the Media Age 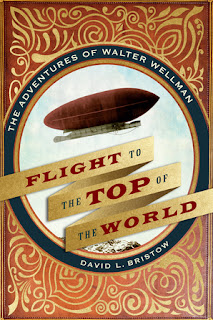 Flight to the Top of the World: the Adventures of Walter Wellman


Walter Wellman is a unique figure in American journalism and exploration, comparable in some respects with Henry Morton Stanley.  However, since Wellman straddled many different fields: journalism, politics, exploration, aviation, technology, and the Polar Regions, he has been a particularly difficult individual to pin down in any one account of his life of writing and adventure.  His five expeditions in search of the North Pole from 1894-1909, along with an attempted stunt flight across the Atlantic in 1910, have long defined his life.  The present volume moves a bit closer to the goal of a full accounting but, in the end, as did Wellman himself so many times, it comes up short by failing to reach its stated goal.

The strengths of this biography are also its weaknesses.  First, the revelation of new details of Wellman’s youth and the beginnings and mid-career of his journalism, especially with regard to the prevailing management and labor turbulence and endemic corruption of the turn of the last century, are excellent.  Unfortunately, these make up a small fraction of the narrative.  Even here there are notable flaws.  Wellman’s coverage of the 1893 Columbian Exposition in Chicago is almost completely overlooked, and covered in barely a sentence.  This critical event in early middle age brought together and put on vivid display all of his eventual obsessions: technology (specifically aeronautics), the Arctic (specifically Franz Josef Land and the North Pole), and Norway (specifically its Arctic sea hunters).

The additions to the Wellman story are offset, as well, by the short shrift given to the final two and a half decades of Wellman’s life.  A full account of what he was doing in those years has been particularly lacking, especially so since Wellman’s expeditions have been covered in varying amounts of detail and accuracy in numerous prior accounts.  Wellman’s deep and complex secret life, beginning also in middle age and involving mistresses and illegitimate children in the U.S. and Europe, may never be known to a satisfying certainty.  It is possible if not probable that he was a bigamist, married simultaneously to Laura McCann, with whom he had five children, in the U.S., and Bergljot Bergersen, with whom he had three, in Norway.  Wellman likely met Bergersen during his final attempt to reach the North Pole from Spitsbergen in 1909, when Wellman was 51 and Bergersen 27.

Wellman died of cancer in 1934 at the age 74 and was cremated, his ashes scattered no one knows where.  Laura McCann died in April, 1938, at the age of 76, and was buried in a solitary grave in Waterford, Virginia, under the name Laura Wellman.  Bergersen died exactly a month later, at the age of 56, and was buried in her father’s plot in Vestre Gravlund in Oslo under the name Bergljot Wellman.  To the last, Wellman’s first wife despised him, while Bergersen’s story is wholly dark.  The stories of both relationships, along with at least one other that produced a child, remain largely hidden behind Wellman’s conspicuously public persona of the adventuring writer.

The second strength of the work is in the author’s overall thesis that Wellman was not so much a journalist or explorer as he was the packager of media events and, in this sense, one of the creators of our modern media environment, which sometimes can feel like our entire environment.  That Wellman was an augury, or even the progenitor, of the 24-hour media cycle, is an area ripe for exploration.  Unfortunately this theme is not reinforced enough to form a continuous thread throughout the work.

As this reviewer wrote more than two decades ago, there was a definite “hype effect” revealed by the confluence of Wellman’s journalism and his expeditions.  Ever since his first expedition, a lark to the Bahamas in 1891 to discover the precise landing spot of Columbus in the New World, Wellman continuously over-promised and under-delivered.  This worked so long as editors, sponsors, and the public, could be convinced that Wellman had an actual chance to reach the North Pole, or cross the Atlantic.

In these large and complicated quests, Wellman’s journalism always served not to inform but to entertain and, more critically, to mask his innate incompetence as either a qualified technologist or a properly prepared expedition leader.  In places, the author himself falls for this.  Describing the 1894 slaughter off the north coast of Svalbard of Wellman’s cohort of Belgian draft dogs, the author asserts: “Other expeditions planned on a high mortality rate for their dogs…” (p. 33).  This is a grotesque oversimplification of Wellman’s inexcusable shooting of all of his dogs just days into his first polar expedition.  Other expeditions did occasionally shoot their dogs, but these sad events came near the end of long and grueling treks or when the explorers were either in extremis or as part of a planned usage of dog meat to save men from scurvy.  For Wellman to make no attempt to bring home his dogs and instead shoot them before he had traveled anywhere, was disgraceful.

Such incompetence allowed professional explorers to quickly size up Wellman and agree that there was no chance of him ever reaching the North Pole, with or without an airship.  Robert Peary knew before 1900 that he would have no competition from Wellman.  Fridtjof Nansen in 1899 had been appalled at Wellman’s casual attitude to planning an escape route from Franz Josef Land.  A decade later, staring at the pillaged ruins of Wellman’s airship base on Danskøya, Nansen scathingly described Wellman as an advertising fraud.

By the time of his aborted 1909 polar airship flight, Wellman was all but ignored even by his own newspaper.  This chronic under-delivery of hard geographic results, more than anything, signaled the end of the explorer’s road for Wellman, and renders the 1910 transatlantic attempt more of a true ‘stunt,’ whereas the polar airship expeditions can be seen, at least in their early iterations, as serious attempts at pioneering fraught new technologies in a most extreme environment.

A more fitting title for the self-described hustling newspaperman would have been: WELLMAN! The Meteoric Rise and Stunning Crash of America’s Most Adventurous Journalist.  The chosen title, with its ironic claim of a Flight to the Top of the World that never came close to happening, copies Wellman’s optimistic hopes but masks his ultimate grinding unhappiness.  This is reflected nowhere so much as in an image of Wellman in 1926 (p. 292), looking utterly worn and vastly older than his 68 years.  It is a portrait of a beaten, forgotten man, one without a single legitimate public success to his credit and with his private life a hopeless shambles.  Wellman would never admit it but he had always been more Barnum than Nansen, yet without a fraction of Barnum’s success, fame, or legacy.  That Wellman is yet to receive his due.
Posted by Russell Potter at 10:30 AM No comments: