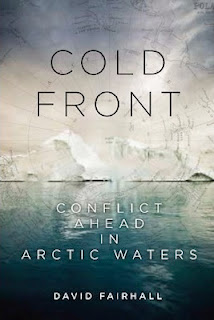 Cold Front: Conflict Ahead in Arctic Waters
by David Fairhall
NY: Counterpoint, $26.00
Reviewed by Russell A. Potter
In the wake of a new near-record ice minimum in the summer of 2011, there is likely to be an increased flow of portentious, dramatically-titled books warning us about the future of the Arctic -- too many for even the most voracious of concerned readers. Some, such as Shelagh Grant's excellent Polar Imperative, will focus on questions of sovereignty; others, such as Roman Shumenko's Arctic Oil and Gas, will look at these resources (and the environmental hazards of retrieving them); still others will address the impact of warming on indigenous peoples, wildlife, or coastlines. So it is quite natural to feel overwhelmed, the more so at a point where the troubled economies of so many nations around the world have added to the list of urgent concerns already facing us in the more populated temperate zones.
But the problem at the top of the world is very unlikely to go away; indeed, by many measures, we seem to have already passed the tipping point at which catastrophic Arctic meltoff is inevitable. So a more rational question, at this juncture, is the one David Fairhall asks pointedly in Cold Front: given that there is almost certainly going to be less and less Arctic ice coverage, and perhaps at some point none in the summer -- what does this mean for the nations whose shores it touches -- nations which include not only Norway, Denmark, and Canada, but the two old superpowers of the "Cold War" era, Russia and the United States? Fairhall, a writer for the Guardian with extensive experience with geopolitical issues of that era, is well-situated for the task, and indeed the most valuable part of this volume is its sharply-sketched account of the history of the Soviet Union's, and then Russia's, commitment to its northern coasts and ports. The sheer magnitude of these efforts, both in the construction of the largest, nuclear-powered icebreakers, and in terms of the amount of raw materials that could be tapped were the Northeast Passage to be predictably navigable, is dramatically described, and indeed they might well be the largest single economic shifts wrought by an even sometimes-open Polar Sea.
Fairhall has other bases to cover, however, and the book seems just a bit thin in places; the Arctic is a region so vast and complex in its many aspects -- its waters, its coastal shelves, its mineral resources, its fauna -- that there's really no way a book of this length can encompass it. Nevertheless, there are several other sections that offer incisive analogies for the potential of a navigable north, particularly those on the Suez and Panama canals. The economic impact of these massive nineteenth-century undertakings, indeed, provides us with what may be the only modern analogies for the savings in fuel and transportation costs, and the resulting expansion and shifting of global markets, that will be the almost certain result of continued warming (indeed, one might note that it was during the construction of the Panama canal that Peary first met Henson). There's also a brief but lovely overview of the British romance of the Northwest Passage, and a reflection on the profound historical irony that a once-treacherous ice-choked passageway that claimed the lives of some of England's greatest navigators may, in the very near future, be at least a reliable summer waterway, as navigable by a multi-ton freighter or tanker as by an Inuk in a kayak.
There will be, as I've said, many books to come on the subject, but if one wants a strong sense of the overall economic and political impact of the predicted retreat of polar sea ice, Fairhall's book is an excellent place to start.
Posted by Russell Potter at 9:06 AM 1 comment: