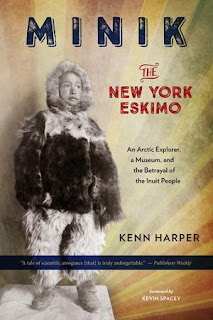 Minik, the New York Eskimo: An Arctic Explorer, a Museum, and the Betrayal of the Inuit People

This is a new, and substantially revised edition of Kenn Harper's book, which was originally titled Give Me My Father's Body: The  Life of Minik, the New York Eskimo. Originally published in 1986 by Blacklead Books in Iqaluit (then still known as Frobisher Bay), the book recounts in plain yet passionate detail the sad details of the life of Minik (or Mene) Wallace, a young boy who was among a group of Inuit brought back from northwest Greenland by Robert Peary, at the seeming behest of his sponsors, particularly Morris Jesup of the Museum of Natural History, and the anthropologist Franz Boas.

The first US edition of the book came out from Steerforth in 2001; we reviewed the book in what was, at the time, only the second 'issue' of the Arctic Book Review. And we stand by everything we said there; we still feel, as we wrote then, that "in a book as meticulous and thoughtful as this, the author can seem invisible at times, but Harper manages to say just what is needed, and when it's needed, to add to the difficult and poignant story he has so patiently uncovered." And this is yet more true of this new edition; every portion from the previous edition has been carefully gone over and selectively refined; there is also a good deal of new material, and new photographs, the fruit of Harper's ongoing research into the story over the past two decades.

Among the more significant such material is the identity and role of the woman who served as translator for Minik, his father Qisuk, and others in their group during their time in New York. She was Esther Eneutseak, a Labrador Inuk who had been in the United States since 1892, on her way to become part of the "Eskimo Village" at the World's Columbian Exposition in Chicago. At the exposition, she'd given birth to a daughter, Nancy, who would go on to become the star of many such attractions, and the first Inuk to be credited with writing and starring in a Hollywood film. At that moment, though, Nancy was back in Labrador being cared for by relatives, while Esther -- only 21 at the time -- had been hired as a maid by William Wallace, the chief custodian at the Museum.

It was a fortunate hire -- Esther soon became known to the anthropologists at the Museum, and served as the principal informant for a key early paper on Inuit burial and mourning customs. This paper, which Harper originally credited to Theodore Kroeber, a young anthropologist who worked with Boas, he has now found to be largely the work of Boas himself, working with Esther. The subject of the paper had a poignant resonance with Minik's own plight: following the death of his father, Qisuk, Boas and the others at the museum staged a burial on the Museum grounds in order to see what sort of customs the young boy would follow. They didn't bury Qisuk's body -- that they wanted for their scientific work, and to mount the skeleton for display -- but only buried a log covered in cloth.

It was the revelation of this deception that marked the start of Minik's sad destiny; although he was adopted by the Wallaces and treated in every conscious way the same as their own son, the news of his father's body reached his ears all the same, from his schoolmates:


"He was coming home from school with my son Willie one snowy afternoon, when he suddenly began to cry.  'My father is not in his grave,' he said, 'his bones are in the museum.'
"We questioned him and found out how he had learned the truth. But after that, he was never the same boy.  He became morbid and restless.  Often we would see him crying, and sometimes he would not speak for days.
"We did our best to cheer him up, but it was no use.  His heart was broken.  He had lost faith in the new people he had come among."

And the resonance of these words still reaches us today. This is indeed a story of a young Inuk, a polar explorer, and of betrayal -- but most of all, it remains a very human story. And the inhumanity of nearly all those in whose balance Minik's life hung has never been told so vividly.
Posted by Russell Potter at 8:17 AM No comments: