What I Remember, What I Know 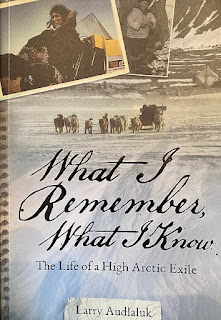 What I Remember, What I Know: The Life of a High Arctic Exile

When I heard that Larry Audlaluk had written a memoir, I knew at once that I wanted to read it. I'd met Larry on a visit to Grise Fiord in 2017, and his account of his and his family's experience as High Arctic Exiles was an electrifying one. You could tell at once that he was a born storyteller, and I knew a book by him would be one worth reading.

For those who don't know the story, the High Arctic Exiles were a group of Inuit families, mostly from Inukjuak on the eastern shores of Hudson Bay, but also including two families from Pond Inlet on northern Baffin Island, who were taken from their homes to be resettled in two places: Resolute Bay on Cornwallis Island and a site on Ellesmere Island's Lindstrom Peninsula, a day's journey from the RCMP post at Craig Harbor (the final move to Grise Fiord came several years later). The families were persuaded by RCMP and other officials that their new homes would be places of abundance, with much game, and that the government would provide them with equipment, such as boats, that they needed to hunt.

Larry tells the story as only he can; although at the time of the relocation he was only two years old, he  experienced these years of exile as his years of childhood and growing up, always listening the stories of his parents and elders. Unbeknownst to these Inuit, they were pawns in a government scheme, dreamed up by bureaucrats who had little idea of how they lived. Following a 1939 court ruling that the Inuit, like First Nations people, were to be the responsibility of the government, Canada had begun to put into place a structure of "management" that often regarded the Inuit more as problems than as people. The fact that Inuit in Inukjuak and other areas further north along the Ungava Peninsula were accepting government assistance at a higher rate than had been anticipated led the government to believe they were becoming "dependent" and that the Ungava area was "overpopulated." Based on these assumptions, they decided that moving the Inuit much further north would solve these nonexistent problems; what's more, having permanent settlements north of Lancaster Sound would reinforce the Canadian presence in the Arctic islands, particularly Ellesmere.

The government also assumed, without any understanding of the type of game and other food sources available, that Inuit wold be able to quickly adjust to their new homes. The Inuit, told that they would be provided with boats and other equipment, packed lightly and were completely unprepared for their isolated new homesteads in a far colder and unfamiliar land. Their disappointment, and the terrible struggle to survive, took an immediate toll on Larry's father, Akeeaktashuk. He began to have fainting spells, and with the last of these, he literally fell down and died. Larry, writing as an adult, understands why, but as a child this loss, and the loss of so many others who had come trusting the promises of the Qallunaat, took an incomprehensible toll on his childhood.

Larry recounts this central story with extraordinary candor and feeling -- but what surprised me most in reading his book was how many other kinds of stories he had to tell. You sense at once what a spirited child, and a lively youth, he was -- every difficulty of life, from being sent to a TB hospital in Québec, to his experience with the residential school system, to the inevitable conflicting pulls that left him, as he puts it, "living in two worlds -- he faces with determination. There were some missteps -- as an older man looking back on the errors of his youth, he is forgiving -- and we his readers are inclined to forgive as well.

If those interested in the modern history of the Inuit people of eastern Canada were to read just one book on the subject, Larry Audlaluk's What I Remember, What I Know, should be it. His life is representative of the experience of so many Inuit of his generation, and his tenacity, forthrightness, and hard-earned wisdom illuminate not only this past, but show the way to a better future to come.

My only criticism -- and it is very slight -- of the book is that the publisher decided to eschew notes, and that the list of place and personal names doesn't always reference the standard forms, so that readers hearing (for instance) of Inujjuak may not realize that this is the same as Inukjuak. Nevertheless, Larry's voice rings clear and strong throughout, never more so than in the last line of the book: "We are here to stay."