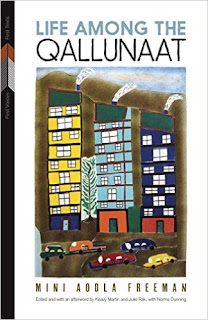 Mini Aodla Freeman is the granddaughter of Weetalltuk, a legendary Inuit boat-builder, guide, and map-maker who remained a healthy member of his own culture despite hanging out for lengthy periods of time with qallunaat (white people). Whatever genes Weetalltuk possessed that allowed him to inhabit two dramatically different ways of life, he seems to have passed them along to his granddaughter.  Her book Life Among the Qallunaat could just as readily been called Life Among Both the Qallunaat and My Fellow Inuit.

Mini, whose surname comes from her marriage to Canadian anthropologist Milton Freeman, was born in 1936 on Cape Hope Island in James Bay. She grew up thinking of qallunaat as being no less exotic than those qallunaat regarded the Inuit. The first portion of the book describes her experiences in Ottawa, where she’d been sent as a translator. A man she meets tells her that he’d just learned how to drive.  She think that’s odd, because she knew how to hitch a dog team when she was five years old.  Restaurants astonish her: why do their occupants eat with cutlery rather than with their hands, as her people do?  She loves riding street cars, but doesn’t know how to request a stop, so she often ends up at the end of the line. Asked what she thought about the Vietnam War, she writes: “I did not know what to say because I had never known war.”

Her backstory comes next. Her two grandfathers, her wisdom-filled grandmother, her nose-rubbing father, her occasionally naughty brother — all are put within the seasonal context that defined Inuit life for millennia. Hardly more than a toddler, she fetches water and firewood (Cape Hope Island is below the tree line); she also sews and chews skins. In the mornings, her grandmother will often say to her, “Mini, you will bear unhealthy children if you stay in bed any longer. Get out and look at the world.”

When Life Among the Qallunaat was first published in 1978, half of its print run was seized by the Canada’s Department of Indian and Northern Affairs on the  assumption that the author had badmouthed residential schools. Yet her account of her experiences in these schools is surprisingly mild. Yes, she was obliged to attend early morning religious services as well as wash vast amounts of laundry, but her ability to regard such activities as examples of qallunaat exoticism probably saved her from suffering more than she did. Her inherent sense of whimsy may have saved her as well.  Consider what she refers to as “my novelty.”  This is her first menstrual period, and since no one had given her advance notice of it, she seems to delight in imagining what it might be.

Apparently, Mini wrote Life Among the Qallunaat directly on her typewriter, with no early, middle, or late drafts.   Thus her memoir has a quite spontaneous feel to it. But her spontaneity is of the quiet sort. Rather than pointing an accustory finger at, for example, a haughty nun, she steps back and regards that nun as a highly unusual species. The result is a significant addition to Canadian indigenous literature and, what’s more, a splendid read.
Posted by Russell Potter at 5:17 AM 1 comment:

Heroic Failure and the British 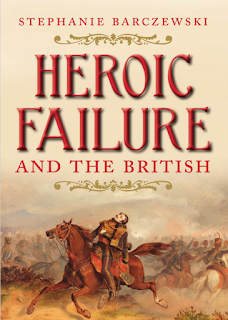 Heroic Failure and the British


When it comes to 'heroic failure,' the phrase today seems somehow already associated with Britain -- or, at least, with popular notions about British history and attitudes. And yet the phrase rings American, and indeed among its earliest uses is in reference to John Brown's raid at Harper's Ferry. Since then, it's come to be used more in sarcasm than in seriousness, casting aspersions upon those who seem to fit its mold, as well as sealing off any consideration of what impulses or values might lie behind it.

That is, until now. Stephanie Barczewski's new volume collects and considers many of the most iconic moments to which this seemingly oxymoronic phrase has been applied, and does so with gusto. In an age when we trade other peoples' "epic fail" moments on Facebook, and take shelter in schadenfreude, we are perhaps in need of a refresher course in the higher stakes for which humans were, once upon a time, willing to find admiration in disaster.

Ms. Barczewski offers us a sort of 'greatest hits' of such events -- the Battle of Chillianwallah, the Charge of the Light Brigade, General Gordon's occupation of Khartoum, and the 'last stand' at Isandlwana in the Zulu War. And, extending the stakes of war into the peaceful endeavors of explorers, she adds Sir John Franklin, David Livingstone, and Robert Falcon Scott to her list. It's a complex, widely historically-spaced series of stories to tell, and a less energetic writer might not have managed it; Barczewski's success is due in large part to her skill at seizing the essentials of each story, while building on the general resonance of her theme until it reaches 1812-overture proportions.

But this energy also has its drawbacks. Taking just her account of Sir John Franklin's final Arctic voyage, the chapter is sprinkled with sundry errors of detail, from describing the area into which he ventured in 1845 as "Canada" (which only came into being in 1867), to mis-numbering his men (130, rather than 129), to representing a conjectural account of Francis Crozier's actions in the expedition's final months as though it were settled fact. The account is not helped by the fact that a portrait of James Clark Ross is misidentified as Franklin's, or that the Franklin memorial in the chapel at Greenwich is repeatedly stated to be in the Painted Hall instead. And yet, despite these issues (which will probably not trouble non-specialist readers), she gets the essential feel of the expedition right, noting how, as the mystery of its disappearance deepened, the quest for the Northwest Passage was moved to the back burner, until its heroic, yet fatal completion by Franklin came to serve the larger myth. Along the way, she illustrates her account with some lovely lesser-known bits of Frankliniana, including the execrable poem in his memory penned by Owen Alexander Vidal, whose prize from Oxford can only be explained by the fervor felt by the public for some immediate gratification of their warm spirits.

And it's these warm spirits, in the end, that Barczewski's main explanation -- that the British deployed their heroic failures to offset their imperialistic ambitions in the public eye -- can't quite find a way to grasp. For instance, in a connection that goes oddly unmentioned in this book, Lord Tennyson's poem, "The Charge of the Light Brigade" was -- at the request of Lady Franklin! -- printed and distributed in great numbers to British troops in the Crimea, including those in hospital. What earthly reason, we might wonder today, would anyone conceive of such a poem as warming the spirits of soldiers still embroiled in a conflict in which "some one had blundered" to such a degree? The answer can only be that, whatever offset such accounts may seem to offer against the perceived sins of Britain, in the time in which they were penned, they served quite the opposite function: that men, "theirs not to reason why," would follow an erroneous order to their deaths, was not a cover for shame, but a cause of pride, however politically incorrect some might feel such pride to be today.
Posted by Russell Potter at 4:05 PM No comments: