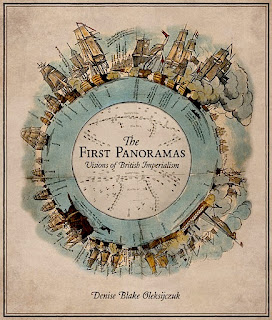 Those familiar with the earliest Panoramas exhibited by Robert Barker and his son Henry Aston Barker will know why a review of this book appears here, in the Arctic Book Review: the very first panorama of the Arctic, depicting his Majesty's ships "Dorothea" and "Trent" in Spitzbergen, was shown at their London venue in 1819-1820. This places it at the very end of the period covered in this lovely new book, which stretches from 1789 to 1821, and of course also makes this book an ideal introduction to the form, execution, and subject matter of the earliest great circle panoramas that preceded it. Never before have these enormous paintings -- not a one of which survives -- been given this kind of detailed accounting. Too often, in both books and online publications, one sees the same small set of images: Mitchell's aquatint showing a cross-section of the Panorama, along with one or two of the printed keys. Yet here are keys to nearly every one of Barker's early views, and they are far more varied and delightful than many might have assumed. Along with them, a complete set of Well's images of Barker's first panoramic view, of Edinburgh, an array of other period ephemera, and a complete timeline showing both the views in the upper and lower circles, make this quite a fabulous volume before one has even read a word of the text.

Yet if the visual panoply of this volume is truly panoramic in its breadth, the text is far more focussed, zeroing in on just three of Barker père's projects: Edinburgh, London, and Constantinople. The reading of these canvasses is very close indeed; in the case of the Edinburgh view it hinges almost entirely on the Battle of Prestonpans, the site of which occupied just one small patch of a vast canvas, and one paragraph of description. The reading of the view of the Fleet at Spithead is similarly prismed, centering on the response of King George (who peered at it with a spectacle-glass) and Queen Charlotte (who pronounced that it made her sea-sick). The discussion of Barker's depiction of Constantinople is perhaps the broadest, but like the other two it centers on a fairly literalistic reading of the painting's subject, as an embodiment of imperialism and an invitation for the viewer to take up, and share in, the monarchical perspective of the painting.

The final chapter, which looks at the printed keys provided to viewers of these paintings, is to my mind the most fascinating; one can see the Barkers almost fidgeting with the visual space of the key, veering from the abstract lines of the Spithead key, to circles with the subject on their edge and descriptive text within, and finally to the strip-format of opposing views which became the norm for most of the rest of the establishment's life. These keys, many of them never before reproduced, make for a remarkable study in themselves, the more so as the paintings to which they once promised an explanatory gloss are now forever lost. A lovely fold-out, which shows color versions of the aquatints of Constantinople above a graphical timeline of the views shown in the great and smaller circles, is a special treat, and will be a worthy reference in and of itself. In this day when so many such things are only available online, it's a delight to find a resource this rich upon the printed page, where it is most at home.

All in all, I would recommend Oleksijczuk's book to anyone who has picked up the fascination with what Ralph Hyde has dubbed "panoramania" -- and it would be a valuable addition to any library with a commitment to holdings in the history of art, and of mass culture, between and within which the panorama lies.
Posted by Russell Potter at 5:16 AM 1 comment: