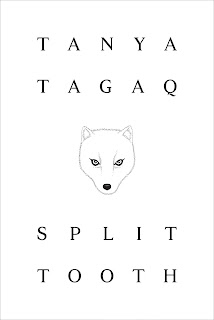 Author Tanya Tagaq’s Wikipedia page describes her as a “Canadian Inuk throat singer from Cambridge Bay (Iqaluktuutiaq), Nunavut, Canada.” Tagaq has released four solo albums of increasing artistic range and ferocity, has collaborated with Bjork and the Kronos Quartet, tours worldwide, is an accomplished painter and an outspoken advocate for indigenous rights and climate activism. It would be no exaggeration to say that she's an Inuit superstar. This is her first book.

Split Tooth is a novel, with frequent nods to memoir, poetry, and traditional tales. At times, to this reader from a temperate clime, the book reads like science fiction or horror: encounters with the Northern Lights, journeys by snowmobile over frozen seas, battles with malignant spirits and musings on quantum physics. But at its icy, fiery heart, this is a book about female puberty.

The unnamed protagonist, when we first meet her, is an eleven-year-old girl living in a small village by Cambridge Bay in the High Arctic. Awkward, smart, and not particularly popular, she spends the long days and long nights in her home town negotiating the universally recognizable childhood assault course of friends, bullies, teachers, neighbors and relatives, while at the same time wishing she had ‘actual breasts’. Alongside this familiar-yet-unfamiliar narrative, there runs a strand of poetry, blocks of text in Inuktitut syllabics, and excellent pop culture illustrations (by Jaime Hernandez.)

Some of the events described or alluded to are shocking. Tagaq certainly pulls no punches. This is not the Arctic wonderland of noble natives that some readers may expect. The first sentence of the book is “Sometimes we would hide in the closet when the drunks came home from the bar.” Alcohol seems mostly for the adults and their tedious rowdy house parties - to be avoided. Our hero and her pals start with cigarette ends and pilfered joints, moving up to butane, rubber cement and gasoline huffed out of snowmobiles. What else is there to do when night and day have no meaning, nothing seems worth learning and the adults are either passed out from booze or away hunting? We learn, as our young hero does, that loud country music blasting from a house is a warning sign - and this is the kind of shorthand at which Tagaq excels, sketching the line from colonial corruption to child abuse.

Predatory adult males are a daily challenge - the teacher who habitually gropes his pupils under their desks, the relatives who sneak into children’s bedrooms at night. One of the first poems in the book is called "Sternum," and begins as a meditation on the human breastbone and ribcage. The last few lines come with the kind of kick that marks her writing throughout  -

However - and I cannot emphasize this enough - Split Tooth is not a grim, dour book. It is a tragedy and a triumph.

The book's second strand, of poems, dreams and folk tales, initially a kind of counterpoint to the coming-of-age dramas of village life, gradually takes over the life of the book. The day-to-day narrative starts to incorporate brushes with malevolent spirits. Wild animals, such as the fox she encounters beneath her parents’ house while hiding from the school bully, walk into her dreams and begin to demand their due or bestow favor. In a key chapter on which the book’s plot turns, she walks out onto the sea ice one night and has an encounter with the Northern Lights that changes her life. What started out as a funny, harrowing tale of village life for an awkward teenager turns into a psychedelic spiritual ordeal ending up with some extraordinary choices for Tagaq’s young hero. I am being circumspect - this book is a page turner, and I’d really hate to spoil it with any further clues. If you choose to read this book, you will be hanging on by your fingertips by the end.

I wrote above that Split Tooth is about female puberty, but of course, Tagaq's gaze is much wider. She is a canny enough author not to be didactic or obvious, but it's clear that among her targets are colonization, institutional religion, and predatory male sexuality. She finds ways to take them all on, one by one, while keeping the book's narrative arrow flying straight. The collective trauma of her people is lived by this one small teenager. The conclusion feels like an exorcism.

What makes all this work so splendidly, is that Tagaq - and her protagonist - are such perceptive, funny, rational company. The book is sharp and bright as a knife, informed not only by Inuit folktales, but also by 21st century climate politics. Every violent act or thought is balanced with kindness and empathy. The suggestive, elliptical poetry is spiced with a lot of very specific cuss words.

The language is extraordinary. Has there been a better description of the disorientating effect on a community of endless Arctic daylight than “Everyone’s clocks tick sideways”? I felt like applauding at the end of each chapter at the sheer quality of the writing. The book is a firework display.

For anyone who has seen Tagaq as a live musical performer, this may come as no surprise. Having read the physical edition of the book, I went in again to listen to the audio book, read by the author with brief throat-singing interludes between chapters. If I had to choose a format to recommend, it would be the audiobook. The hardback is a lovely object (and there is also a vinyl album of the poems), but the five-hour audio book is another level. It is a performance.

The journey from recording studio to written page hides pitfalls that have tripped many an artist. But this book's icy white covers and red-tipped pages contain wonders. Tagaq writes with clarity, rage, humor and authority. In this book she has created what might be a defining artistic statement of the North. It is an Arctic masterpiece.
Posted by Russell Potter at 7:12 AM 1 comment: