As affecting the fate of my absent husband 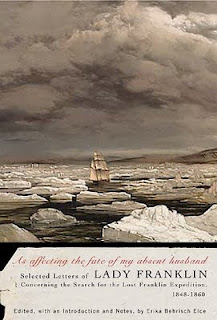 As affecting the fate of my absent husband: Selected Letters of Lady Franklin concerning the search for the Lost Franklin Expedition, 1848-1860.
Edited, and with an introduction and Notes, by Erika Behrisch Elce
Toronto: McGill-Queen's University Press, 2009.
$39.95
Lady Jane Franklin was, in many ways, a more public figure -- and a more successful one -- than her famously missing husband Sir John. She deployed so many rhetorical fusillades from her residence in Pall Mall that it became commonly known as "The Battery," and although her quest was, in the end, only partly successful, it was with some justice that The Times could refer to her as "our English Penelope."
The past two decades have seen dozens of books on the final Franklin expedition, but only a very few have focused directly on the woman at whose call more than 36 ships were launched into uncharted Arctic waters. Penny Russell's 2003 book This Errant Lady uses Jane's journals and letters to illuminate a cross-country trip through Australia that she undertook while Sir John was governor of neighboring Van Diemen's Land, and it remains, I feel, the most immediate portrait; from its pages one can imagine, at least for a moment, what an encounter with her Ladyship might have felt like. Kenn McGoogan's 2005 biography, Lady Franklin's Revenge, gives a much fuller portrait, and although its title hints at some criticism of her methods, the book as a whole offers an admiring view. And so it was with great eagerness that I looked forward to Erika Behrisch Elce's As affecting the fate of my absent husband.
Elce's book is a significant landmark; it offers, for the first time, a complete collection of Lady Franklin's public correspondence, the very letters in and through which she masterfully summoned up public and private support for further searches. It's beautifully designed, aptly edited, and accompanied by just the right amount and kind of contextual materials that will aid the ordinary reader's enjoyment of the volume, and yet satisfy the more scrutinizing expert. My only disappointment is that her private correspondence, save for a couple of brief notes to Benjamin Disraeli, is not represented here; while it's true that to include it would have meant a very different, and larger undertaking, I certainly hope that at some point this can be done. I can testify from experience to the difficulty, expressed by many previous scholars, in reading Lady Jane's small and closely-written handwriting, and not all of her letters and diaries are readily available, although the Scott Polar Research library has a substantial collection. If, as I hope, a complete and substantial publication of these materials is undertaken, I certainly can't imagine a more capable editor than Dr. Elce, whose engagement with her subject, and grasp of the rhetorical landscape on which this lone figure stood so tall, are extraordinary.
There are, I am certain, many treasures yet to be found. In one of her most poignant missives, addressed to James Anderson in December of 1854 and reprinted in William Barr's admirable volume for the Hakluyt Society, one can hear the poignant voice of a woman whose range extended from a roar down to a pointed whisper:

You will receive, I am sure, with kindness the earnest wishes of one who is most deeply interested in the important mission with which you are charged. May God strengthen and guide you in the execution of it ... I do not expect my dear husband to be among the survivors --if you should meet with his corpse which I think will be found wherever the ships are found, I beg you to bring me his locks of hair and I also entreat of you to bring me sealed up and directed to myself all of the letters you can find addressed to him or me ... The ordinary journals of the officers must of course be unearthed as they may be able to guide your researches -- but it is the private letters and papers I desire to be kept sacred from every eye but my own.

Ler us hope that we will hear more of this voice again, and soon.
Posted by Russell Potter at 11:11 AM No comments: