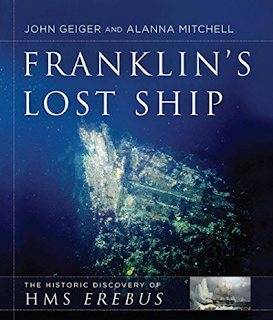 By John Geiger and Alanna Mitchell


The September 2014 discovery of HMS Erebus, one of two long-lost discovery vessels from the third Arctic voyage of Sir John Franklin, garnered international interest and will undoubtedly count as one of the greatest marine archaeological finds of the century. As the fitting culmination of a six-year effort in difficult conditions by Parks Canada and its partners, this discovery will undoubtedly result in a bookshelf full of new publications concerning its archaeological, historical, and even political implications (full disclosure: I have one in manuscript form). Franklin’s Lost Ship, as the first of these, has the advantage of primacy and immediacy, and serves as a good introduction to the story of the discovery of the wreck and the historical background.

Mr. Geiger, the primary author, after a career as a journalist and author, now serves as CEO of the Royal Canadian Geographic Society, a partner in the 2014 search. This book is one result of the Society’s role in the expedition, which was to bring the news of this expedition to the world, and set it in its geographical and historical context. As outlined in a formal contract between the partners, the Society was to engage in promotional and educational efforts and produce “a coffee table book devoted to the discovery.” Geiger, although not personally present at the moment HMS "Erebus" was found, was on one of the ships involved in the northern search area, and thus had ready access to the Parks Canada team that discovered the wreck. Alanna Mitchell, also a renowned journalist and author, assisted as co-author and the combined experience of the writers is reflected in the high quality of the writing throughout.

It's no reflection on his writing skills that Mr. Geiger has had the misfortune of producing two books dealing with the Franklin story that are both more memorable for the photos than for their text. Geiger, as co-author with Dr. Owen Beattie, produced one of the earliest Franklin-related books of the recent literary resurgence. Frozen in Time (1987) detailed the 1980s exhumation and investigation of three of Franklin’s crew who died during the first winter at Beechey Island. The evocative photos of the well-preserved faces of those seamen as they emerged from the permafrost helped to breathe new life into public awareness of the Franklin mystery. Yet unlike Frozen in Time, where the illustrations are remembered mainly for their dramatic impact, here they are used as integral elements to tell the story.

Almost every page features at least one image and many pages consist of nothing else; most are accompanied by informative captions relevant to the adjacent text. The images fall into three categories. The first are exquisitely beautiful Arctic land- and seascapes, which ably help the reader develop a sense of place and the conditions faced by both Franklin and his men and the participants on the modern expedition. Also included are standard images familiar to anyone interested in the Franklin story - maps, the "Victory Point" record, relics, Thomas Smith’s famous painting etc., as well as the expected portraits of Sir John, Lady Franklin, Rae, Hall and others. These assist in illuminating the historical sections of the book. Undoubtedly, the most welcome images are the photos from the 2014 expedition, many never before published. These show the participants at work, the highlights from dives on the Erebus and the relics recovered.

The book is sensibly laid out in alternating chapters dealing with a narrative of the 2014 expedition interspersed with historical background telling of Franklin’s doomed third expedition. This is a clever way to address the two main, but disparate, audiences for this book. The first audience, already steeped in the lore of Arctic exploration, will primarily want to read about the recent discovery of this important wreck. The second audience, coming to the subject anew and wishing more context than press reports provided, will appreciate the intervening expository chapters. A final epilogue considers the importance of the discovery in light of modern conditions of resource and community development, climate change and sovereignty issues.

The chapters dealing with the actual 2014 Victoria Strait Expedition are ordered in chronological sequence, although with northern and southern search groups operating concurrently there is some overlap. The text is a refreshingly straightforward telling of the main incidents, obviously gleaned from interviews with the participants themselves. It conveys both the difficulties of the long search and the flash of joy and excitement at the eventual discovery. Appropriate and ample credit is given to the Parks Canada, Hydrographic, and Arctic Research Foundation teams, all of whom invested years in the search effort. Other partners, both governmental and private, some of whom luckily joined the team just in time for the discovery, are also extensively covered. Indeed the full list of partners is presented no less than six times, with some lengthy personal and organizational biographical asides.

In an effort to place the Franklin expedition in context the historical chapters cast a very wide and impressive net. Starting with James Knight’s mysterious disappearance in 1719, subject of an earlier Geiger book, almost every expedition sent to find the Northwest Passage in the first half of the nineteenth century is mentioned.  The many Franklin relief expeditions and later efforts to determine his fate are given necessarily brief but informative sketches. The text shows an admirable familiarity with the historical background, and will serve the general reader, who is coming to the subject for the first time, as a welcome introduction. The book also provides brief but illuminating biographies of the main historical protagonists, with diversions into the geopolitical, scientific, and cultural significance of the Franklin expedition to both his contemporaries and to the current world situation.

Perhaps unsurprisingly considering the fact that his earlier book introduced the topic of lead poisoning as a contributory factor to the Franklin disaster, the subject of lead poisoning is repeatedly woven into the fabric of this new book as well. Geiger continues to promote the idea that solder from Franklin’s tinned food is the probable source of the lead, an idea that has been seriously questioned since it was first proposed. In one of the more purple passages of the book Franklin’s retreating crews are portrayed as “frail addled men” with the implication that their mental state had been compromised by lead-poisoning, another idea that has recently been called into question.

Another obligatory Franklin topic, cannibalism, is mentioned as well, although modern forensic work on the subject is ignored. Here the text cannot resist a dip into journalistic sensationalism, picturing the retreating men “likely carrying their comrades’ heads, arms, hands and legs … as a ready supply of calories,” which is, to my knowledge, totally unsupported by any evidence.

Throughout the book Inuit traditional accounts are consistently acknowledged as a primary reason for the discovery of the Erebus. This is true and fitting, however there is no discussion of how the traditions contributed, which is simply offered as a fact. The book also attempts to use other Inuit recollections to augment the history of the Franklin expedition as known from the sparse documentary and physical evidence. The text generally follows the “standard reconstruction” of a single, fatal, abandonment in 1848 and attempts to integrate Inuit remembrances of visits to the ships, of one sinking, of a large joint hunt, and of the “black men” to that traditional scenario. Most of these details are less amenable to the single-abandonment reconstruction and the authors remark that further discoveries on the Erebus , especially if accounts of living white men aboard should be confirmed by physical evidence, may cause a “wholesale rewriting of the history books.”

The technical aspects of the book are good. The page layout of images, text, and white space is well balanced and attractive, and the book itself is solidly printed on heavy, glossy stock.  Notes are used sparingly but sixty percent of them are taken from only five authors. The short select bibliography relies mainly on recently published work with half of the books having been published in the last ten years.

Franklin’s Lost Ship takes the story of the discovery of the Erebus up to the spring dives of 2015. As such it is a timely account for a public interested in that story, but it will not be the last word on this amazing discovery. The authors acknowledge this when they remark that “untold discoveries from this astonishing vessel are still down there,” and indeed Parks Canada’s September 2015 dives revealed new elements and spectacular artifacts that inspire both questions and wonder. Much more will be learned as further work proceeds on the five-year plan developed to properly assess the wreck. But for those of us who hang expectantly on every new development this is a worthy first installment.

Posted by Russell Potter at 5:00 AM 4 comments: