Loss and Cultural Remains in Performance: The Ghosts of the Franklin Expedition 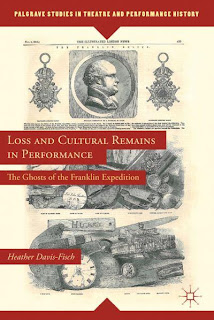 Loss and Cultural Remains in Performance: The Ghosts of the Franklin Expedition


Books on various aspects of the Franklin expedition have been a staple here at the Arctic Book Review since our very first issue nearly fourteen years ago; we've reviewed biographies of Franklin, volumes of Inuit testimony, the lives of Franklin officers, those who searched for him, and of Lady Franklin, along with novels and poems inspired by these events. There's a great body of conventional historical and biographical material on the subject, enough to fill a lifetime's study -- but what has been wanting has been a book which fully examines the cultural impact and lasting significance of the narratives that have clustered around this history, its mythologies (in the full Barthean sense). Aside from Margaret Atwood's (still brilliant) lecture "Concerning Franklin and his Gallant Crew" (published in Strange Things), and a few scattered essays, such as those collected in John Moss's Echoing Silence, there have been very few such studies; even in my own book, Arctic Spectacles, the Franklin saga is just one part of a larger cultural history.

Which is why Heather Davis-Fisch's book is so very welcome; here, from the perspective of performance history and theory, is the first fully-realized cultural analysis of the reception and significance of the Franklin disaster, both on the public 'stages' of its time, and ours. In so doing, she considers not only theatrical instances -- whether shipboard or, as with The Frozen Deep, on a London stage -- but theatricality in the broader sense, as when Lady Jane Franklin put aside her mourning dress for bright colors in protest of the Admiralty's striking her husband's name from the active list.

For, in the nineteenth century, the dawn of a mass reading public, the illustrated press, photography and  telegraphic dispatches meant indeed that all the world was a stage, visible to nearly anyone, and the Arctic drama was for a time its principal attraction. And within this larger stage there were many smaller ones, whether it be the Arctic shipboard theatricals that Davis-Fisch sees as invoking and enacting a sense of almost familial camaraderie, the figurations of Inuit such as Qalasirssuaq (who was depicted being transformed into a fox in a northern pantomime), or the mix of drum-dance and blackface minstrelsy witnessed by Charles Francis Hall aboard the whaler "George Henry."

Davis-Fisch analyzes these episodes acutely, and follows the thread of performance throughout these very different cultural enactments. Indeed, between Inuit and Euro-Americans, contact itself was almost inevitably a performance; whether in the exaggerated hand-shaking and calls of "Teyma" or "Mannik Toomee" that accompanied first meetings, or the "miming" of Aglooka of his ships having been crushed in the ice, theatre comes in where language cannot find out a way. Her analysis of these contact dramas then segues neatly into an astute analysis of the staging of The Frozen Deep, in which she shows how Dickens's peculiar non-theatricality, received as a kind of translucent naturalism, played a central role in the enormous public catharsis the play provided to its original audiences. It's also, by the by, a very good explanation of why the play, in its original form at least, never had that power again, although modified versions of it have managed to re-infuse the drama with a fresh sense of pathos.

Davis-Fisch's book is, for all these reasons, the most original and engaging work on the cultural impact of the mid-century Franklin fascination yet to appear -- and, it's to be hoped, a harbinger of further such studies of the larger dramas of exploration as such, in all the regions of the world that the "West" thought of as distant. We have plenty of books on hand which re-tell the main story, shed some light on one or another figure, or propose one or another solution, but there are very few books like the present volume.

For, as has been apparent for some time now, the Franklin mystery is never really going to be "solved," not in the usual sense of that word, at any rate. As Davis-Fisch aptly notes, "attempts to reconstruct what happened to the Franklin expedition break down because the material remains of the expedition produce, rather than alleviate, ambiguity." And, for those who appreciate it, this ambiguity, in fact, lies at the heart of the enduring fascination with the Franklin saga; without it, the amateur historian, like the amateur actor, would find no place upon which to stage his or her response.

NB -- The book is solidly and handsomely produced with eight halftone illustrations; it is to be hoped, however, that Palgrave Macmillan will at some point make it available at a more democratic price, whether as a paperback or an e-book (the Kindle edition, at $68, is still far too expensive).
Posted by Russell Potter at 7:09 AM 1 comment:

The Ambitions of Jane Franklin 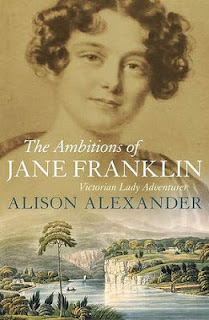 
For all her enormous stature -- her inspiring of three dozen search expeditions for her missing husband, her persuasive powers over Presidents and Prime Ministers, and her eponymous ballad, Lady Jane Franklin has remained a difficult subject for biographers and historians. It's not that she left no documentation -- between her own letters and journals (extensive, though her handwriting is infamously close and difficult to read) and those of her niece Sophy Cracroft, there's ample material -- it's just that, between the private woman who emerges in these manuscripts, and the public figure so dominant that her apartments opposite the Admirality's headquarters were dubbed "The Battery," there seems at times a strange gap. Not only that, but even with all the material available, there a second, perhaps unbridgeable gap between what Jane confided to her own writings, and what she actually, deeply, thought and felt. She was no confessional writer, not especially forthcoming about her own motives, and what few traces of controversy or impropriety there may have been, she and her correspondents took care to discreetly excise or destroy. Few recent books have really managed to bridge either of these gaps; while Penny Russell painted a delightfully wry and engaging portrait of one of Jane's undertakings in This Errant Lady, and Ken McGoogan fired a broadside of his own with Lady Franklin's Revenge, it's hard to reconcile these two accounts, and the sole volume of her letters recently published, that edited by Erika Elce, includes only her published, public missives.

Happily, in Alison Alexander, Jane Franklin has found a biographer as adroit and willing to explore obscure nooks and crannies as herself. Alexander, a widely-recognized historian whose works encompass both Australian and specifically Tasmanian history, is perhaps best known for her historical accounts of women, particularly her 1987 volume Governors' Ladies: the Wives and Mistresses of Van Diemen's Land's Governors. She is the first biographer to bring the kind of broad familiarity with primary historical sources in Australia needed to set Jane's time in Van Diemen's Land in context, as well as to make full use of the extensive papers held at the Scott Polar Research Institute in Cambridge. And, despite the vast amount of material involved, Alexander has written an eminently readable, engaging, and lively portrait, one which for the first time gives the reader of today a full sense of Lady Franklin's curious admixture of perspicacity, persistence, and whimsy, and the way she used all three of these qualities to advance her husband's career and her own status, all the while clinging to a curiously conservative set of (often unarticulated) values.

For Jane Franklin, as she emerges here, is a bundle of contradictions. She was a social butterfly who passed up many an eligible bachelor, settling on a famous but famously milquetoast man; an outward embracer of penal reform who privately favored a harshly moralistic philosophy of prison management; an inveterate hostess of balls and social gatherings who at often preferred to absent herself from "civilized" company; a tireless traveller capable of considerable exertion but who often chose to be carried along in a chair; and a remarkable embodiment of a woman with an active intellectual and social life who nevertheless disdained other women who wore their intellect, or their politics, on their sleeves.

Jane was active -- restlessly so -- but not what one could call an an activist. The portrait that emerges here in Alexander's capable hands is of a woman who delighted in the private machinations made possible for her as the wife of a famous explorer and colonial governor, but preferred to demur, crediting her husband and always invoking his name rather than her own. As a Governor's wife, she established schools, founded learned societies (though declining to be a formal "member" of them), and conducted ambitious tours of Tasmania, Australia, and New Zealand in which she sought to learn all she could about the people and places she encountered. And, when her husband became famously lost, she mobilized searches for him, public and private, on two continents. Her letter to President Zachary Taylor led to the First Grinnell Expedition; her pressure on the Admiralty helped launch several government-funded searches, and when official interest declined, a series of private ones. The most famous of these was that of Francis Leopold M'Clintock, which in 1859 finally succeeded where others had failed in finding a final record of Franklin and his men -- but fifteen years later Jane was still supporting searches for her husband's men and the 'papers' she was sure they'd cached somewhere; the last of these -- Sir Allen Young's -- did not return until after her death.

She was skilled at using the power of the pen, and although she fulfilled a youthful promise not to 'write any books,' her writings could fill many of them. Alison Alexander has read them all, and judiciously draws from them to illustrate the texture of Jane Franklin's daily life, opinions, and passions. And though it is true, as Alexander notes, that it's very hard to see into Franklin's inner character, The Ambitions of Jane Franklin comes as close any any book has (or likely will) to discovering the essence of this remarkable woman.

NB: The book is handsomely designed, and includes numerous plates, both color and black-and-white. Notable among them is a photograph, taken in Yosemite in 1861, which is the only known one of Lady Franklin.
Posted by Russell Potter at 6:44 AM No comments: