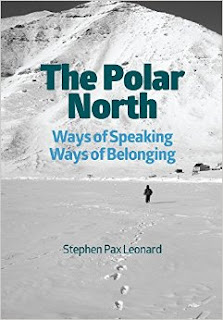 The Polar North: Ways of Speaking, Ways of Belonging


Stephen Pax Leonard's book The Polar North joins a long line of popular accounts by travellers to the far north who seek to experience and learn from traditional "primitive" culture before it disappears. Leonard spent a year among the Inughuit (in his spelling, Inugguit) conducting linguistic research, concerned about the impending loss of oral traditions, and indeed Inughuit culture as whole, in the face of rapid cultural and climatic change. His background is as a linguist of Scandinavian languages and this was his first experience in the far north. His approach is phenomenological, concerned with the spoken word, as well as gestures; language not as “a disembodied, purely formal set of grammatical and syntactic relations” but as a part of “the totality of human experience” (p. 28). Leonard discusses this aspect of his research, but this book is a memoir – a more scholarly treatment is in the works.

The book opens with a prologue in which Leonard outlines the genesis of the project and sets the scene, describing his rushed preparation (six weeks) and eventual arrival in Qaanaaq. Leonard freely exposes his naive expectations; his romanticized view of the people he expects to meet, based on decades-old popular accounts; his deeply felt disenchantment with the modern world; and his expectations that he will find relief in the unspoiled wilderness of northern Greenland. Readers familiar with the north, or with anthropological field work generally, will see that he is setting himself up for disappointment. Exacerbating this situation, he appears to have neglected to consult the community about their willingness to participate in his endeavor, and encounters considerable resistance to his work.

From the beginning Leonard approaches the project, and the book, with hubris, describing his own “innate” gift for languages. He writes “[h]aving this special gift, I would have an immediate advantage over researchers who try and conduct fieldwork in their own language and who end up with an incomplete understanding of the societies they are working in because they understand so little of what is going on” (p. 15). Considering that anthropologists routinely spend years in the field and do become fluent in the language of the people they study, one wonders how Leonard can think that twelve months will be enough to gain complete understanding of a very different society, especially one which he seems to have made so little effort to learn about beforehand. Leonard also makes it clear that this is not an objective ethnography but a subjective memoir in which he is determined to :”challenge the sterile, soulless approach to standardised academic writing” (p. 17) and to present the "unvarnished truth" (p. 24). These are laudable goals, but readers should be cautioned that the truth he presents is one mediated by his own experiences and perspectives.

Following the prologue, ten chapters present a sometimes discursive narrative of Leonard’s experiences over the following year, interspersed with discussions of language, ways of speaking, and ways of belonging. As do many anthropologists, he at first struggles to integrate into a community, but eventually learns enough of the language to converse and establish working relationships. He attends church, visits Qaanaaq’s only bar, participates in celebrations and funerals, goes on hunting trips, and makes some ill-advised solo ski trips. Through it all he struggles with the heater in his “hut,” rails at the way Inughuit hunters treat their dogs, and ruminates on questions of belonging, both within the culture and with reference to himself, the lone anthropologist among the “other” Inughuit. Chapters 5 and 9 break up the narrative, being wide-ranging discussions of “Ways of Speaking” and “Ways of Belonging.” Readers with no background in linguistics may have trouble following some parts of these chapters, while linguists will no doubt find them too superficial. Falling somewhere between the two (although closer to the first group), my own sense is that Leonard may have something interesting to add to our understanding of language in Inuit society, but exactly what that will be will have to await the promised fuller treatment. An epilogue serves to summarize the challenges of fieldwork; what can be learned from a holistic approach to language; and the importance of experiencing language as “an intersubjective phenomenon enabling one to experience the other as a subject and not an object” (p 295). Leonard ends by railing against industrialization, climate change, and the rapid change currently facing all northern communities.

In broad outline this is worthy and interesting but the end result is unsatisfying. In the interests of presenting “unvarnished truth” Leonard gives us a glimpse of his own evolution over the year. Before he arrived, Leonard had  a stereotypically romanticized view of the Inughuit. Early in the narrative, before he is comfortable in the community and conversant in the language, faced with the reality of life in modern northern community very different (at lest superficially) from what he expected, Leonard is judgmental. His description of his first visit to an Inughuit home is filled with pejorative adjectives: fetid, pungent, chaotic, stained and (with reference to mataq, raw narwhal skin) tough (p. 33). Qaanaaq is “tatty, shabby, dysfunctional” (p. 31). He also perpetuates other stereotypes, stating for example “[a]s with many indigenous groups, and most obviously the Aborigines of Australia, the Inugguit are sadly very prone to addiction” (p. 83). While it is true that addiction is a problem in many indigenous (and non-indigenous) communities, and Qaanaaq has its fair share of social problems, including alcoholism, I know of no research that attributes these problems to indigeneity per se. But Leonard leaves this statement unexamined, erroneously implying that susceptibility to addiction is an inherent characteristic of indigenous societies.

Over time Leonard develops a more nuanced view, grows more accustomed to traditional foods and their tastes, textures, and odors, and meets people who are hospitable, kind, helpful, and welcoming, but the damage has already been done. In bringing up these stereotypes and leaving them unchallenged he has lost an important opportunity to dispel myths still commonly believed by many in the south.

Following along from his reliance on stereotypes, Leonard falls in to the twin traps of an earlier generation of anthropologists: thinking that the Inughuit have an unchanging past (see p. 49 - “this is and always has been a static society”), sometime formerly glossed as ‘the ethnographic present’ and typically understood to be the way people lived immediately before contact with Western society; and that they are representative of an earlier stage of human existence – expressed through frequent use of words such as ‘primitive’ and ‘primordial’ with reference both to pre-contact culture and to the language itself. Both of these notions have long since been shown to be fallacies, and again Leonard has missed an opportunity to dispel myths and stereotypes that are still sadly common in the popular imagination.

One final note on the editing. One has to be concerned when errors jump out from almost the first page: the maps that accompany the prologue identify Baffin Bay as Baffin Sea, and more egregiously Ellesmere Island is labeled Baffin Island. Such basic errors of fact do not bode well for the quality of the editing at any level. The glossary is short and idiosyncratic. Most often, but not always, Inuktun words are followed in the text by their English translations and it is unclear why some were selected to appear in the glossary. Similarly, the bibliography is lacking. Key works are missing: Rasmussen is here, and Freuchen, but Holtved is not, although his work is referred to, albeit briefly. Nowhere is Michael Hauser mentioned, although he has written extensively on Inughuit songs, an area Leonard was keen to study. At the other end of the spectrum, Miriam MacMillan's hagiography of her husband Donald, I Married an Explorer (originally published in the US as Green Seas, White Ice) inexplicably makes an appearance, although none of MacMillan's own work based on years living among the Inughuit, is mentioned. I have great respect for Mrs. MacMillan but she was no ethnographer and had only very limited experience of Inughuit culture. There is no index.

In sum, I found this book to be unsatisfying. Leonard's linguistic research may be valuable and sophisticated – evaluation of that will have to await a more scholarly publication – but in other areas he is unreliable and overly reliant on stereotypes, resulting in a superficial understanding of the culture. His two key points, that Inuktun is in danger of disappearing, and that climate change poses a serious threat to Inughuit culture, are important but he is far from the first to make them. His message is obscured in this rambling, discursive narrative. He makes it clear from the start that he is off for an adventure, seeking wilderness and a version of the Inughuit gleaned from historic and popular accounts. He is clearly unprepared for what he finds. Readers may find his adventures appealing and certainly his honesty is refreshing, but I can’t help but be disappointed that he did not take more care to better prepare himself before he left for the field and to more carefully examine the stereotypical views he brought to his understanding to the community. Had he done so he would have had a better experience, and a better book.
Posted by Russell Potter at 6:41 PM