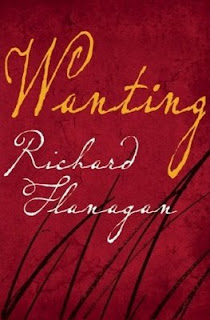 Wanting is the latest, but surely not the last, in the tradition of fiction inspired by some aspect of the career of Sir John Franklin. And yet, even in this crowded field, it stands out as one of only two or three that draw fully and richly from the indigenous cultures among which Franklin sojourned, and it is the only one to take on his and Lady Jane's relationship with the aboriginal peoples of Tasmania. At the same time, by alternating this narrative with a fictionalized account of Charles Dickens's personal crises in the later 1850's -- a period which would see both the death of his youngest daughter and his separation from his wife -- he complicates the colonial landscape with a cobblestone corollary. The most unexpected figure in all of this is a tragic heroine of almost Dickensian proportions, the native Tasmanian girl Mathinna, adopted by the Franklins during their time at Government House in Hobart Town, then abandoned when they returned to England in 1843.

Mathinna's story has been told before -- most powerfully in a radio play by Carmen Bird, In Her Father's House, which was broadcast on ABC Australia in 2003. Yet here, interwoven into Flanagan's dense, Tolstoyesque garden of forking narratives, it seems somehow even darker and more desperate. Mathinna was part of that remnant of Tasmania's original people who had been rounded up and isolated on Flinders Island (named after Franklin's uncle) under a policy conceived of as protection but in practice both a cultural and literal act of genocide. The program was administered by George Augustus Robinson, the chief "Protector of Aborigines," a man who never appreciated the irony of his title. Early on, Flanagan gives us a vivid portrait of the workings of his mind, and we see the method in the madness he directed. To him, Lady Jane's desire to adopt Mathinna is a conundrum; he recognizes a certain imperious selfishness to which, given the Franklins' position, he has little choice but to accede. Jane comes across as a bossy, breezy, and thoughtless woman, and her husband -- when he comes across at all -- is reduced to little but a wheezing, overweight sack of compliance. Rarely in the tradition of Franklin fiction has the "great man" appeared so reduced; when, as he always does, he dies in this narrative, one can scarcely even muster a feeling of pity.

At the same time, we are introduced to the world of Dickens, and here again Flanagan has clearly done his historical homework. We see him both as the toast of polite society and the restless recluse, wandering the streets of London by night; we meet two men -- John Forster and Wilkie Collins -- whose rivalry for his intimacy triangulates this period of his life. Dickens, of course, was quite carried away by the public feeling over the disappearance of Franklin, offering his services to Lady Jane to dispel Dr. John Rae's reports of cannibalism in 1854, as well as producing, with Collins, the 1857 play The Frozen Deep, which was in many ways a public elegy for Franklin's men. And it was during the Manchester performances of the play at which he met Ellen Ternan, a young actress who quite won his heart, and with whom he spent the rest of his life in a possibly Platonic relationship (they burned all their letters, so the world may never know).

The parallels between the world of Dickens and that of Mathinna seem at times a bit strained; the "experiment" of "civilizing" an Aboriginal girl, and her later abandonment, seems quite distant from Dickens's emotional travails in the midst of a bustling London literary scene. And yet time, being made of moments, works some wonders here; Flanagan frames the epiphanies of his characters as vividly and multifariously as the famous seven hundred looking glasses with which the "Erebus" and "Terror" were festooned for a fancy dress ball while calling on Hobart Town in the midst of James Clark Ross's circumnavigation of Antarctica. That these same ships, only a few years later, would be witness to Franklin's own death and nearly twenty of his men, is a fact not lost on Flanagan, who finds light in darkness and darkness in light. He makes the ball into a costume party, giving Mathinna a wallaby mask and Sir John -- who escorts her on board -- that of a black swan, which enables richly memorable lines: "'Our princess of the wilds,' sighed a wolf."

Mathinna herself comes through vividly, and with the kind of uncondescending empathy that's rare in fictional depictions of tragic native figures. Flanagan has caught something of the weave and the weft of her world, of the impossibility of the promise leant to her by Lady Franklin's stiff affection, the gazes of the white fellas, and the famous red dress given by her Ladyship, preserved in the oil portrait she commissioned. The details of Mathinna's known life form a kind of armature for the fabric of Flanagan's imaginings, but he leaves some parts of his own cloth unwoven and gauzy, as he should.

It would be unfair to the reader to trace the ultimate denouement of these darkly twinned, deeply tangled tales -- suffice it to say that Flanagan manages to make a sort of resolution out of the lack of resolution offered by history. In a Beckettian phrase, Garney Walch, the old oxcart driver who had first driven Mathinna into Hobart Town muses on the meaning of it all:

And so it goes.

Posted by Russell Potter at 6:10 AM