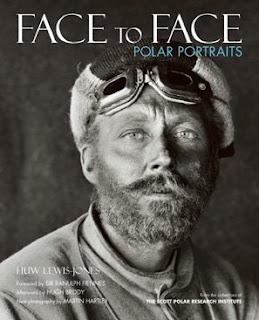 
Face to Face is a travelling exhibition—and now a beautifully produced book—that emerged from “Freeze Frame”, the Scott Polar Research Institute’s project to digitize some 20,000 photographs from its archives. The project’s curator, Huw Lewis-Jones, seems to have been particularly struck by the range of portraiture in the collections, and decided to create an exhibition in which 50 portraits from the archives would be supplemented by another 50 by the photographer Martin Hartley (some previously taken, some newly commissioned), a hugely experienced veteran of 17 polar expeditions. Each of the 100 featured portraits is presented on a full page or double page spread with a caption to the side (usually a generous couple of paragraphs) about the sitter. Preceding these are an essay by Lewis-Jones on early photography and its first applications in the polar regions (“Photography Then”), and succeeding it is a conversation between Lewis-Jones and Hartley on the differing challenges presented by polar conditions to the art today (“Photography Now”). And bookending the whole lot are a foreword by the explorer Ranulph Fiennes and an afterword by the anthropologist Hugh Brody. As a further bonus, all the text features are themselves very generously illustrated.

Herbert Ponting’s haunting cover portrait of the piercing eyes and sun-blackened face of Cecil Meares—expert dog driver on Scott’s Terra Nova expedition—underlines what will surely be the expectation of many that these will mainly be portraits of explorers. Many indeed are, but an important point the selection underlines is that the poles, or at least the Arctic, are a region where people live as well as explore and do science, a point made with gentle grace by Hugh Brody in his afterword, the most beautiful prose in the book. From the portrait of an unnamed Inuit boy in Godhavn in 1869 to another in Resolute Bay in 2008, Inuit sitters are a continuous presence (though it’s a pity there aren’t any images of indigenous people from Arctic Eurasia alongside them). But the “portrait” part of the title is equally important as the “polar” part: these are all individual portraits, a single sitter’s body, and often just the face, dominating the frame. And all are posed, not merely cropped from a general action or group shot. Having said that, there is much variety in the settings in which they are found. Modern photography, with its much shorter exposure times, allows images to be captured quickly out on the ice with the wind howling and the icicles forming on beard or eyebrow, though this can lead counterproductively to images that feature polar clothing more than the people wearing it (can a picture in which literally no part of the face is visible, such as those of Stephen Jones, David de Rothschild, and Ian Wesley, be meaningfully described as a portrait?).

By contrast, many people famous for doing uncomfortable things in uncomfortable places are discovered relaxing in their sitting room or library, emphasizing that it’s the individuals and their achievements, not the setting, that defines their inclusion. And for the best-known subjects, for whom a choice of images was presumably available, the selection is often pleasingly unexpected: Scott and Wilson not in harness, but in three-piece suits; Shackleton munching a sandwich; Vivian Fuchs with a towel on the way to a bath. Fame itself, however, is not a criterion for inclusion, and almost any connection with the poles confers eligibility if it results in a good portrait. Lewis-Jones and Hartley regret some of the names they haven’t been able to include, and interested readers will no doubt be able to think of more—Otto Sverdrup, Adolf Nordenskiöld, John Rae, Elisha Kane, Isaac Hayes, and Frederick Jackson are a few of the obvious ones that popped into my exploration-biased head—but perhaps a simple absence of images in the SPRI collection is to blame. It’s important to remember that this isn’t an encyclopedia with claims of, or responsibility to strive for, comprehensiveness or consistency. Even so, the many omissions make some of the inclusions less comprehensible: for instance the polar connections of Keith Dedman, a naval helicopter pilot who once airlifted passengers from an icebound ship, and Cha-Joon Koo, a Korean insurance executive sent to Antarctica to “check on” Park Young Seok (who perhaps should have been included instead), seem tangential to say the least. And Hartley’s fondness for a pretty pair of eyes has led to the inclusion of two portraits—the Spanish girlfriend of an adventurer about to set off from Siberia, and a Turkish-Bulgarian popcorn seller in London who happens to be wearing a fur-hooded parka—that frankly have no place in the selection no matter who else is in or out.

Lewis-Jones’s extended opening essay artfully summarizes the first few decades of technical development in photography before segueing neatly into the portraits taken by Richard Beard (the first British practitioner of Daguerre’s process) of Franklin’s officers in 1845, from which he proceeds to summarize the role of photography in Arctic exploration during the 19th and early 20th centuries—as documentary tool, as raw material for painters, as artistic statement in its own right, and finally as motion pictures. There is much of value here for readers interested in any aspect of the first century of photography’s history, including philosophical and aesthetic questions as well as its technical developments and social effects.

But the real interest for this reviewer was in “Photography Now”, in which Lewis-Jones and Hartley discuss not only the equipment needs and techniques of a present-day polar photographer but also range widely over the psychology of portrait-making, the role of paid expedition photographer in balancing his own professional judgement with his client’s wishes, and whether anyone travelling somewhere on the earth’s surface in the age of Google Earth and satellite phones can any longer be described as an explorer. Humans more or less ran out of virgin territory to explore sometime in the 20th century (at least without going underwater or into space—the first twice as large an area as the earth’s land surface, the second somewhat larger still!), and we are accustomed to the idea that the challenges available now are essentially secondary: doing something using a new technique, or in a new combination, or faster, or in more difficult conditions. But Lewis-Jones wonders whether even that ethic of self-challenge is enough any longer, or whether “to be imagined as valuable they [also] need to be relevant”. Just as few non-athletes would contemplate running a marathon without doing it for a “good cause”, most polar travelling expeditions, both solo and team, now also try to bring some climatic, zoological, or social problem to wider attention—and climate most of all, since the poles are the places in which global warming will have, and is already having, the most dramatic effects. Scientists have the best case of any outsiders for being at the poles; they are “adding to the existing body of knowledge”. But they fly into known locations and then generally stay put, so their work no longer involves exploration in a geographical sense. So this well thought-out, nicely balanced, and carefully crafted book not only casts a retrospective view on polar history, but captures it at a moment when our understanding of and engagement with it is in transition, as those trying to keep alive a tradition of heroic confrontation with the elements sit sometimes happily, sometimes uneasily beside those who anxiously monitor its environmental condition, and those whose lives and culture are inextricably bound up with the fate of the icy realms.
Posted by Russell Potter at 5:38 AM