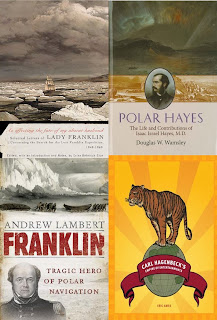 Our site may have been quiet for a few weeks, but the silence you hear is actually the sound of our reviewers carefully paging through some of the year's most exciting new titles of Arctic interest. With our new format, these will be published as soon as they're complete, so you won't have to wait for a full "issue" to accumulate before you can sample our latest offerings.

Russell Potter is currently reading Andrew Lambert's new biography of Sir John Franklin from Faber & Faber, the first new scholarly biography in many years. Lambert, a professor of naval history at King's College, London, was featured in John Murray's documentary, Finding Franklin. Meanwhile, Kari Herbert, fresh from work on her forthcoming book The Heart of the Hero - The Women Behind Polar Explorers, will be reviewing Erika Elce's new collection of the letters of Lady Jane Franklin, As affecting the fate of my absent husband. Jonathan Dore will offer his assessment of Polar Hayes, Douglas Wamsley's long-awaited account of Isaac Israel Hayes, whose remarkable career stretched from the Second Grinnell Expedition in 1853 through William Bradford's voyage aboard the Panther in 1869. Last but far from least, our Nunavut correspondent Kenn Harper will bring his knowledge of Arctic shows and exhibitions to bear on Eric Ames's Carl Hagenbeck's Empire of Entertainments, the first book-length study in English of the German zoo magnate whose polar panoramas were stocked with live bears and seals.

2009 promises to be a banner year for Polar books; in addition to the above titles, there are several noteworthy efforts coming later this year. John Bockstoce's comprehensive new study, Furs and Frontiers in the Far North: The Contest among Native and Foreign Nations for the Bering Strait Fur Trade, is due out this fall from Yale University Press. Glyn Williams, whose Voyages of Delusion was well received here a few years past, has a enticing new offering with Arctic Labyrinth: The Quest for the Northwest Passage, due out in October. Lastly, we're looking foward keenly to Beau Riffenburgh's latest effort, Polar Exploration, a richly illustrated account of the era of Shackleton, Mawson, Scott, and Amundsen.
Posted by Russell Potter at 3:20 PM