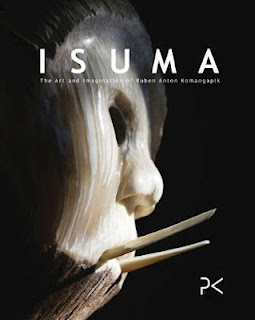 Isuma: The Art and Imagination of Ruben Komangapik


William Butler Yeats once said of the Greek sculptor Callimachus that he "handled marble as though it were bronze." The Inuit sculptor Ruben Komangapik handles no marble, but in his hands, wood, bone, and narhwal horns grow as smooth and fluid as polished metal, or even glass; it is almost as if some spirit hidden within the materials has animated them and brought them to vivid, viscid life. His sculptures play with surfaces, using and altering their texture to create singular effects. Eyes of polished stone gaze out from spongy bone in Taqanaqruluk;  walrus heads with polished tusks peep out of a bony snowbank in Hard Times; an osseous Sedna with an onyx face offers a qulliq with a row of tiny stone flames in Sedna, the Oil Giver; a hooded hunter is poised on a shelf of horn as an unsuspecting seal swims up toward its aglu from below in The Seal Hunter.  There is movement here, in these and many others of Komangapik's figures, movement that animates and belies the more static poses of the more 'traditional' sculpture of the Inuit co-ops; indeed one could say that they dance circles about them. If the stiffness of some of this art was made stiffer by the demands and expectations of southerly art dealers, collectors, and museums, Komangapik pokes subtle fun at their frozen tastes, alluding to them by breaking every one of their rules.

Some of the most striking figures are his Tupilait, the shamanistic spirit-forms whose fearsome shapes and dangerous capabilities underlay so much of the more innocuous figural Inuit art that came later. Some appear playful at first, an Arctic riff on the GEICO Gekko -- but what sharp teeth you have, grandmother! The better to eat you with, one can hear the figure answer. And there are complete stories here too, illustrated by sculptures in sequence, such as "The Legend of the Blind Boy and how the Narwhal came to be."

The striking photographs of these pieces by Estelle Marcoux Komangapik, the artist's wife, are almost as powerful as the works themselves; strikingly lit and set before dark backgrounds, their sharp dimensionality makes them almost seem to leap from every page. The book includes Dorothee Komangapik's commentary on the works and on Inuit culture generally, as well as a biography of the artist, in which we learn that he is a descendant of Quumangaapik, one of the Inuit who followed the shaman Qillaq on his epic journey from Pond Inlet across the frozen seas to northwest Greenland. Qillaq managed this astonishing feat by traveling, in his shamanistic form, over the ice in his dreams to discover the way forward.  Now, a descendant of the families he led guides those who see his work in a similar manner; Komangapik's scupltures stand at the edge of that same territory of dreams, where the path of the spirit is found within the twisted tracks of organic matter made fluid by the sheer force of one man's imagination.
Posted by Russell Potter at 1:36 PM