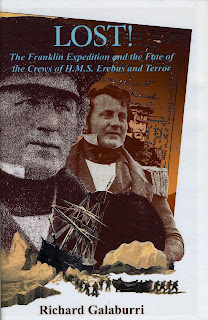 Lost! The Franklin Expedition and the Fate of the Crews of H.M.S. Erebus and Terror

Into the icy mists surrounding the final fate of Sir John Franklin's lost Arctic expedition there comes a new figure: Richard Galaburri. An Arctic book dealer, collector, and traveller, his short essays on various aspects of northern history have appeared the The Musk-Ox, Arctic, and other specialist journals, but those seeking a copy of Lost! at their local library or bookstore may be forgiven if they begin to wonder whether the book and its author are themselves phantasms of the frozen zone; even the vast WorldCat archives contain no record of the volume.  Happily, I can report that both the book and Mr. Galaburri do in fact exist; both may be found on eBay, where he's been quietly selling this modest volume for the past year, and I hope that this review will bring them to the attention of a wider audience.

And it will be attention well-deserved, as this slender but meticulous volume is in fact the best available introduction to the essential issues that make the Franklin mystery an 'unsolved' one. Written in a lucid and accessible style, it lays out the basic facts of the case with admirable clarity, and then traces the evidence uncovered by Charles Francis Hall, the Inuit testimony with which any meaningful account of Franklin's fate must grapple. One may disagree with some of the details Galaburri's proposed solution, as I do, and nevertheless find it stimulating and provocative; the author has done his research carefully, and his evidence is sound (and amply footnoted). It is the rare book that will appeal both to newcomers to the story, and those who have grappled with it for decades.

What follows is chiefly for the latter, and I'll apologize in advance for the density of detail; for those not already steeped in these questions, I can simply recommend Mr. Galaburi's book, followed by Woodman's two volumes; those who have read any or all of these will be familiar with the issues I raise.

The summary of the Franklin evidence offered in the first few sections of the present book is admirable; up to the point of the 1848 abandonment, there is fairly broad consensus as to the disposition of the ships and their crews. Two elements of Inuit testimony, however, offer conflicting alternatives as to teh destiny of the last groups of survivors, and it is these that Galaburri wisely focusses upon. The first is the testimony of one Kok-lee-arng-nun, and old man who gave Hall two spoons with the Crozier crest and told a remarkable tale of visits to the commanders of two ships, who seemed to be Franklin and Crozier, under the names 'Too-loo-ah' and 'A-gloo-ka.' He described 'Too-loo-ah' as "an old man with broad shoulders, thick and heavier set than Hall, with gray hair, full face, and bald head. He was always wearing something over his eyes (spectacles, as Too-koo-li-too interpreted it), was quite lame, and appeared sick when they last saw him. He was very kind to Innuits -- always wanting them to eat something. With this man was his second officer, 'Aglooka' ... after the first summer and first winter, they saw no more of Too-loo-ark, and then A-gloo-ka was the Eshemutta (captain)."

This story, as Galaburri observes, cannot be explained away (as Hall himself and others have tried) as a reminiscence of Sir John and James Ross; the elder Ross had a luxutriant head of hair until the day he died, which was a quarter-century after his expedition, not during it. I believe there's really no other way to explain this testimony other than to posit that some Inuit bands did indeed visit the ships prior to the abandonment, prior indeed to Franklin's death. The dating is even accurate: after the first summer (that of 1846) and winter (1846-47) was precisely when he died.  Still, this evidence has been handled gingerly by some experts, most notably David Woodman, who points out that there is no other evidence that Inuit knew about or visited the ships in the pack ice off King William Island, and that this story must therefore refer to a later event when the ships were further south; in his version Too-loo-ark is Crozier, and thus it is Crozier who dies and is replaced by a subordinate. Galaburri takes the Kok-lee-ang-nun story at face value, and vividly recounts it, along with Hall's (eventually skeptical) response.

But this for Galaburri is just the turning point for his second hypothesis, which is that the "Aglooka" described here and in other Inuit testimony is indeed Crozier.  His argument is based on Crozier's character and Arctic experience, and is of course an appealing one; I myself always find that when I imagine the elusive Aglooka I tend to picture Crozier.  There is no concrete evidence, however, and given that the name was also applied to Ross and Rae and other strangers, the identification of Crozier here must fairly be called conjectural. Given that, however, the rest of his theory is reasonable and well-argued; he believes that Crozier and his men headed east rather than west, apparently making for Igloolik.  He thus credits (as does Woodman in one of his theses in Strangers Among Us) the sighting of strange white men on the Melville Peninsula to this group. There is a conflict here, though, since in the tales of Tooshooarthariu and others, Aglooka told them he was going to "Iwillik" (Repulse Bay) and not to Igloolik.  Clearly, these must be different groups, unless Aglooka changed his mind at some point, and/or there may have been two Aglookas.  Nevertheless, it's a strong argument that one of them was Crozier, since many of the Inuit told Hall that a man who had been with Parry at Igloolik in 1822 was among this group of last survivors -- and that could only be Crozier.

It still seems a bit of a stretch to imagine that a Crozier-led group would march all the way to Igloolik rather than to nearer resources, such as the supplies remaining at Fury Beach, or Repulse Bay, where contact via whalers was possible. Still, since he had been there before, the familiarity of the place and the possibility of finding some familiar Inuit faces must have been strong attractions. Some of the "strangers" were indeed seen by Inuit in the area of Igloolik, but mistaking them for "Etkerlin" (sub-Arctic Indians), they avoided them. It would be ironic indeed if Crozier guided his men this far, but was unable to communicate with any Inuit. If this was his route, he and his companions must have perished just short of their goal; nevertheless their struggle, as Galaburri recounts it, is one that elicits considerable admiration.

There are a few minor shortcomings to the volume: Galaburri did not consult the original Hall papers, relying only on those Nourse transcribed, and he did not make use of Woodman's Strangers Among Us, wanting to avoid any undue influence on his own theories. Nevertheless, his book offers a brisk and lucid possible solution, one which judiciously notes where and how it departs from others; by choosing a single strand of possibility, Galaburri is able to make his account a far more readily readable one. I'd recommend it to anyone commencing their own Franklin search, and hope that it will be more widely available in the near future.
Posted by Russell Potter at 12:07 PM