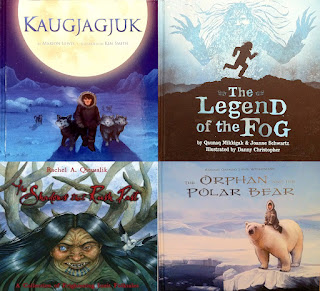 Having heard about the publications of Inhabit Media a few months ago via an article in Quill & Quire, I eagerly awaited review copies of their new series of children's books based on Inuit tales and legends. When the package finally arrived, I was frankly dazzled by the array of beautifully illustrated books that spilled forth, particularly by Rachel Qitsualik's The Shadows that Rush Past, grippingly illustrated by Emily Fiegenschuh and Larry MacDougall; as a longtime fan of Ms. Qitsualik's "Nunani" column in the Nunatsiaq News, I knew this would be a good one -- but the wealth of other, unexpected treasures was equally impressive.

Here at the Arctic Book Review we don't usually review many children's books, but these -- among the first Inuit-penned books of their kind -- seemed worthy of special mention. I've since read them, and sent several out to others of our reviewers, but wanted to give an overview of the series here, just to alert readers to the wealth of new and significant titles that are now available. And finally, a word of caution: as those who have read either traditional Inuit tales or the imaginative works of Inuit writers -- Larry Milliman's A Kayak Full of Ghosts and Alootook Ipellie's adult collection Arctic Dreams and Nightmares come to mind -- will know, these tales often have dark, or darkly comic twists, different but easily equal to the grimmest of Grimm's tales. If your kids like really scary books -- Stephen Gammell, for instance -- then I am certain they'll love these volumes. And, completely without persuasion or preaching, they will learn a few things about Inuit culture and history that they're unlikely to discover anywhere else.

The Shadows That Run Past is easily the best of the bunch, as I expected -- Ms. Qitsualik is a practiced storyteller, whose voice immediately takes readers into the circle of traditional narrative. Her version of the story of the Amautalik, a fearsome creature with an amaut made of caribou antlers who steals children, is particularly chilling, and is rightly featured on the cover. And yet I must confess that The Legend of the Fog, a terrifying odyssey of a hunter's taken prisoner by giants who refer to him simply as "food," gave me just as good a scare, with Cape Dorest elder Qaunaq Mikkigak's tale perfectly complemented by Joanne Schwartz's masterful full-page illustrations. The other two books, Marion Lewis's Kaugjagjuk and Sakiasi Qaunaq's The Orphan and the Polar Bear are both teaching tales about young boys struggling with the journey to manhood who receive vital help from natural spirits. Qaunaq's book is the more conventional of the two, as in it the young boy receives help from the polar bear spirit and returns to his band as a full-fledged hunter. And yet it is Kaugjagjuk, to my mind, which is the richer tale; here the boy shamed and mistreated by his tribe is taught harsh lessons by the spirit of the Moon; he indeed returns strengthened, but does not take up a place with his band, leaving them behind with a deep sense of shame at how they treated him. It's a strong story, but a good one, and although it might put some parents off, will give young readers a much more forceful understanding of the traditional Inuit worldview.

Inhabit Media, located in Iqaluit, has these and many more books available and in the works. They are finely written, brilliantly illustrated, and well-printed on durable stock to survive the many readings I am sure they will all have in the hands of any young readers lucky enough to get hold of them. We here at the ABR wish them all the best with their publishing endeavors.
Posted by Russell Potter at 11:11 AM