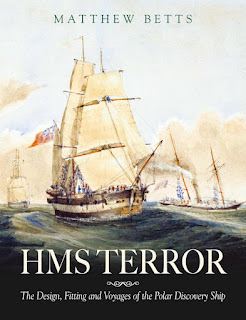 HMS Terror: The Design, Fitting, and Voyages of the Polar Discovery Ship

Ever since the Arctic expedition of Sir John Franklin disappeared into the ice in 1845, most of what has been written about the lost ships and doomed men has been speculative. The recent discovery of his two ships, HMS Erebus and HMS Terror, has put an end to this as we await the results of an ongoing investigation of the wrecks. Authors recognize that discoveries in the ships, perhaps including documentation, would quickly render further speculation obsolete. To avoid this, they have embraced biographies of the ships themselves. Michael Palin’s recent book Erebus: The Story of a Ship tells the career of Franklin’s flagship, and now Dr. Matthew Betts has published a memoir of the junior, but in many ways more interesting, vessel. In contrast to Palin’s book, which treats the social history of the officers and crew extensively, Betts concentrates on the ship itself, essentially basing his analysis on the construction (and reconstruction) details of this amazing ship. The book is organized into four parts with a common thread.

After a short 5-page introduction, part 1 of the book consists of four chapters covering Terror’s design and history. The first provides an admirable overview of Terror's career as a warship. The narrative covers not only the most famous and oft-cited events (the bombing of Fort McHenry, Back's 1836 expedition, the Antarctic years) but, in detail, other events in the ship's eventful career (a blockade of Baltimore, the battle of St. Mary’s, Georgia, her last combat action in 1824 at Algiers, her first wreck during the Lisbon hurricane of 1828) that are usually disregarded. Other noteworthy events, and fixtures in most histories, such as an extravagant ball at Hobart in 1840, are ignored. It quickly emerges that for Betts the various crew of the Terror are essentially interchangeable. Although given their due for skill and heroism, here and throughout the book, Betts concentrates on Terror herself, emphasizing her construction and conversion from warship to exploration vessel under the supervision of master shipwright William Rice.

The following chapters deal with the Ross Antarctic Expedition of 1839–1843 and the subsequent Franklin expedition of 1845. The overall narrative is skillfully told, but elements that are generally not emphasized, such as sailing qualities and a lengthy description of damage suffered during a collision between the two ships in 1842, feature prominently. The final refit supervised by Oliver Lang is told in detail as the ships were prepared for their last voyage, incorporating lessons learned during her Antarctic adventures and the new technology of steam engines and removable propellors.

Part two - The Design and Fitting section - consists of a text chapter, followed by one of the ship’s detailed plans. Here, one learns of Terror's hull construction and cabin layout and her major equipment - armament, anchors, capstans, illuminators, heating systems, pumps (two types), stoves, paint scheme and boats. The wealth of detail therein may overwhelm the general reader but will prove valuable to historians and archaeologists and settle many bar bets. The dimension and scantling list that ends the chapter extends for eleven pages and may have more conveniently been attached as an appendix.

Unless you are comfortable with the terms such as scarph, futtocks, keelson, spirketting, and carling, some of this section will require access to a good dictionary of nautical terms, which may have also been the subject of an appendix. If you bypass the terminology, you will still gather the overall point that the ship was built to be extremely strong, further strengthened for polar service, and outfitted with all of the best equipment available.

Chapter 6 consists entirely of the ship's plans, all expertly drawn and labelled. These are stunning works of research and art. As well as the expected plans of the ships themselves, Betts includes drawings of minor structures - Crozier's shaving table, a seaman's chest, the Captain's Steward's cabin, even the water closets (toilets), all of which will be compared with the fittings found on the wreck of Terror itself, and may help in identification of partially destroyed or missing structures.

Part Three - Building HMS Terror - contains the final three chapters dealing with Bett's construction of his 1:48 model of the ship, his involvement in assisting with the full-scale reconstruction of Terror for the recent AMC television series of the same name, and a final chapter on the 2016 discovery of the wreck. Using photographs of model pieces, the movie set, and actual elements of the wreck photographed by divers, these vividly bring three-dimensional reality to the plans of Chapter 6.

The construction of the model as a hobby project was the inspiration for the research and writing of this book. Here again, dedication to accuracy and attention to detail shine through. Bett's pleasure in sharing his modelling techniques and various solutions to the challenges involved is admirable. Those who aren't current or prospective modellers can happily bypass the explanations and simply marvel at the photos.

The chapter on Bett's involvement with the TV series should greatly interest the many fans of that production. As an acknowledged expert, Betts was contracted by the show's producers to assist the production designer in recreating the ships and material culture. The results were exceptional and received widespread critical praise. The set photos in the book again bring the ship to life, although there is no substitute for watching the series itself (ignore the monster).

The final chapter relates the fortuitous discovery of Terror four years after Betts began his model and describes her condition as known from the initial survey work done by Parks Canada. A straightforward telling of the discovery, and evocative photos of the wreck, lead Betts to speculate about the role of Terror in the final tragedy. Based on the most current evidence, his analysis is not unreasonable and again relies heavily on details of the Terror’s location and condition.

Throughout the book, the quality of the numerous images and plans is extraordinary. Many contemporary paintings of Terror are rendered in colour, and the ship’s plans (copies of which hang on my study wall) are clear and often expertly redrawn and labelled. The book concludes with an extensive bibliography and an index to assist in navigating the text.

Betts’ admiration for his subject is evident throughout, "she took everything the Arctic pack-ice could throw at her. She sheltered her men to the very last and never, not once in three harrowing expeditions, abandoned them to the ice. She performed exactly the way she was designed, and there was nothing more anyone could have asked from Terror. This remarkable ship’s story needs to be told: she is the greatest polar exploration vessel the world has ever known."

Dr. Betts has honed his fine eye for detail as a professional archaeologist, enhanced by his avocation as a modelmaker. To these skills, he now adds storyteller and writer to produce this passionate biography of an interesting and significant ship.

Posted by Russell Potter at 8:00 AM