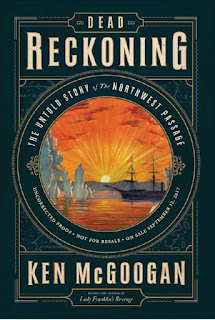 Ken McGoogan has produced yet another worthy northern book. Dead Reckoning sets out to tell, as its sub-title proclaims, “The Untold Story of the Northwest Passage.” The book is peopled with the usual suspects in the history of Arctic exploration and the search for the elusive Northwest Passage. I needn’t name them here; if you are reading this, you already know who they are.  But this book introduces other names that will be unfamiliar to many readers, even some well-versed in northern history. Their stories are the “untold stories” of the sub-title.

McGoogan points out in his Prologue that orthodox history only grudgingly acknowledges non-British explorers - he specifically mentions Amundsen, Kane and Hall - as well as “short-changing” fur-trade explorers - and here he mentions Hearne, Mackenzie and Rae. He has mentioned these explorers before, of course, and his focus on John Rae is well-known. But in the present volume he takes his championship of the neglected considerably further. “The twenty-first century,” he says, “demands a more inclusive narrative of Arctic exploration–one that accommodates both neglected explorers and forgotten First Peoples.”

His goal, then, is “to restore the unsung heroes to their rightful eminence.” He recognizes not just the physical work, but the contributions, of the fur-trade explorers, and of Dene, Ojibway, Cree, and especially Inuit. He points out that Franklin’s ships would still be undiscovered at the bottom of the ocean were it not for Inuit and their oral histories.

And so the reader encounters unfamiliar names in this sweeping tale. McGoogan’s point is that they have largely been nameless to date, so I feel compelled to name them here, in solidarity with McGoogan’s championing of them, and to help in rectifying the injury that past histories have done them.

Thanadelthur, an unsung Dene woman who assisted James Knight, has her story told in these pages, as do other Dene leaders, Matonabbee, who accompanied Hearne, and Akaitcho, who assisted Franklin on his overland expeditions. The Ojibway hunter, Thomas Mistegan, played an important role in support of John Rae. Even the Iroquois voyageur (and murderer), Michel, makes an appearance.

Two Greenlandic Inuit are recognized in these pages: John Sakeouse is present for his role in helping John Ross make the first contact by Europeans with the Inughuit of north-western Greenland; Hans Hendrik is featured for the reliance Elisha Kent Kane placed on him.

Early Inuit interpreters in what is now Canada ranged far and wide. They include Tattannoeuck and Hoeootoerock, both from the western shores of Hudson Bay, but who travelled extensively with explorers as far west as the Mackenzie Delta. Albert One-Eye lost his life in the service of John Rae. Ouligbuck (William Ouligbuck Senior), an Inuk from the Keewatin region, worked with explorers and traders as far east as Fort Chimo (Kuujjuaq) and as far west as Fort McPherson, certainly an accomplishment worth noting, yet the historical record has been generally silent on his contributions, less so for those of his son, William Ouligbuck Junior, on whom much of Rae’s success depended.

Other Inuit contributed directly to the work of those Qallunaat explorers who searched for Franklin and his missing men. The oral histories provided by men like In-nook-poo-zhe-jook and Puhtoorak, and the indispensable couple, Tookoolito and Ebierbing, not to mention their physical labours – and those of men like Tulugaq - in support of the expeditions of Hall and Schwatka, leave one wondering why their stories have not been known earlier. Tookoolito’s brother, Eenoolooapik, played an important role in the rediscovery of Cumberland Sound by whalers, but no role at all in the search for Franklin or the Northwest Passage. But his biographer later sailed as assistant surgeon with Franklin, and this prompts McGoogan to tell his story in a “what if” chapter. Might things have turned out differently for Franklin if Eenoolooapik had travelled with his friend, the surgeon, on Franklin’s doomed expedition? Eenoolooapik can be seen here as a surrogate for Inuit in general, and the question becomes – What if Franklin had made use of Inuit travel methods and Inuit knowledge? It’s a question worth pondering.

McGoogan devotes a chapter also to Knud Rasmussen, an explorer-ethnographer of Danish and Greenlandic heritage, who spoke Greenlandic (closely related to Inuktitut) as his native language. He collected Franklin reminiscences on his epic dog-sled journey across Arctic America from Hudson Bay to Bering Strait. He travelled with two indispensable Inughuit companions. Ironically McGoogan doesn’t give us their names, but they were the hunter, Qaavigarsuaq, and his female cousin, Arnarulunnguaq.

Of course, the story must end (and does) with acknowledgement of the contributions of Louie Kamookak and Sammy Kogvik, both instrumental in the finding of the Erebus and Terror.
McGoogan highlights also the work of non-British explorers whom he feels history has short-changed, among them Jens Munk, a Dane who led an early and tragic expedition to Hudson Bay, and Roald Amundsen, the first to sail the Northwest Passage. David Woodman, a modern-day researcher, is given the credit he richly deserves for his work in pointing out that Inuit oral histories held the key to “unravelling the Franklin mystery.”

McGoogan achieves admirably his goal of bringing the unsung, whether Indigenous or Qallunaat, to the fore. In some areas, I would suggest he overachieves it.

In his desire to give Indigenous people their due, he sometimes over-reaches. While there is ample reason to include Hans Hendrik for his work with Kane, and Tookoolito and Ebierbing for their assistance to Hall, there seems little reason to discuss Hall’s expedition in search of the North Pole, in which all three participated, in a book on the Northwest Passage; perhaps it was a way of making the Inuit biographies more complete. The inclusion of a chapter on Minik (the New York Eskimo) in a book on the passage is more perplexing, although I am personally grateful for the exposure this inclusion gives to Minik’s sad story.

And yet a few Inuit who were involved in the search for Franklin are omitted, perhaps because the author felt their roles were quite minor. Kallihirua (properly Qalaherhuaq, and usually abbreviated to Kalli), from northern Greenland, was with Ommanney in 1850 and ended up in England where he assisted Captain John Washington in preparing an English-Eskimo dictionary for the use of Franklin search parties. The West Greenlander, Adam Beck, also played a minor (and confusing) role in the Franklin search.

In his blog on August 30, McGoogan pointed out that “copies from the first print run include a map-related glitch that will turn these books into collectors’ items.” The challenge implicit in his statement was to find the glitch. OK, I found it. It is the misplacement of the maps (but not the map titles) on pages 206 and 254. All the maps, by the way, and especially the end-paper maps are superb.

A book of this scope necessarily gives rise to questions and quibbles. They are remarkably few.

In discussing James Knight’s ill-fated expedition, which perished, it is claimed, in its entirety, he makes no mention of “the English Man.” Between 1738 and 1744 Francis Smith, the captain of a Hudson’s Bay Company trading sloop which ventured annually north from Churchill, reported that at Whale Cove the Inuit called one of their number “the English Man.” The captain noted that he was of an age that meant that he could possibly be the son of a survivor of the Knight expedition and an Inuit woman. This is supposition, of course, but would have made a nice aside.

The controversial Moses Norton of Churchill is referred to as “HBC governor” (43), when what is meant is “chief factor,” the position that Norton held there from 1762 until his death in 1773. The same error is repeated in reference to Samuel Hearne (52).

In “Matonabbee Leads Hearne to the Coast,” the slaughter of Inuit by Dene at Bloody Falls is recounted. But I was disappointed that there was no reference to recent scholarship casting doubt on the veracity of Hearne’s account of the massacre – whether one believes the recent scholarship or not - although an earlier chapter casts doubt on Hearne’s account of the James Knight story.

Eenoolooapik’s birthplace, Qimisuk, is not Blacklead Island (155), which is farther down the coast of Cumberland Sound and has the Inuktitut name Uummannarjuaq. Qegertarsuag should be Qeqertarsuaq (364). “Qallunaat,” the word given for “white man” is the plural form; the singular is “qallunaaq” (399).

On page 335, it is claimed that in 1870 when Lady Franklin visited him, Charles Francis Hall was working on his “soon-to-be-published book Life with the Esquimaux: A Narrative of Arctic Experience in Search of Survivors of Sir John Franklin’s Expedition.” But that book was published in 1866, the American edition of a two-volume work first published in England under a different title two years earlier. In 1870 Hall was, in fact, working on plans for his North Pole expedition. He never published an account of his second expedition, the one in which Lady Franklin was interested; his notes were edited and published posthumously as a third-person narrative in 1879.

But these are minor quibbles in a sweeping work that sets out to bring the Indigenous contributors to northern exploration into the story as participants with names – not just tribal affiliations or occupations stated as “hunter” or “my faithful interpreter” – and lives, families, and accomplishments.  McGoogan achieves his goal. Let’s hope that future writers follow his lead and give Indigenous people their rightful place in the development of inclusive, cross-cultural histories of northern exploration.

Posted by Russell Potter at 4:15 PM