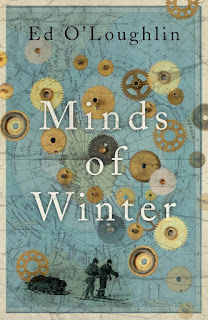 
Over the years here at the ABR we've reviewed quite a few novels inspired by one or another aspect of the lost Arctic expedition commanded by Sir John Franklin. Since 1990, when Mordecai Richler 'broke the ice,' as it were, with Solomon Gursky Was Here, there have been at least twenty of them, and in their pages we have had just about every version of Franklin one can imagine. As Margaret Atwood whimsically prophesied in a CBC documentary in 1994, we've gone all the way from 'Franklin the dolt' to 'Franklin the mystic' -- and many other versions in-between. Franklin's seconds have not been neglected (Crozier and Fitzjames having a novel apiece), nor have his Dene and Inuit guides, the prisoners he oversaw in Van Diemen's Land, or his persevering, long-searching wife.

And now we have Ed O'Loughlin's Minds of Winter -- which may well be the Franklin novel to end all Franklin novels. Never have so many different narrative threads been taken up and twined together; the cast of characters here includes Crozier, Joseph René Bellot, William Kennedy, Joe Ebierbing, Jack London, Cecil Meares, Roald Amundsen, and even Albert Johnson, the "Mad Trapper of Rat River." It would seem a daunting task to connect so many historical figures in a single volume, something like trapping demons in a cursed box, but the talisman that O'Loughlin employs is deceptively modest: a single marine chronometer, Arnold 294, which showed up intact at a 2009 auction in the UK when it was supposed to have been issued to Franklin's ships 164 years previously.

There is a frame narrative -- though in a house as crowded with giants as this one is, its structure at times seems almost too slight for it to stand. It centers on Nelson Nilsson and Fay Morgan, two young people with curious family connections to the Arctic, who encounter one another by chance at the airport in Inuvik, Northwest Territories. Fay is retracing the steps of her grandfather who once worked on the D.E.W. line, while Nelson is seeking his older, smarter brother Bert, who seems -- before his disappearance -- to have been an avid polar history buff. We read the historical chapters of the novel, as it were, over their shoulders as they poke around in Bert's files, but for us the dry documents expand into vivid visions, as though experienced in a Potterian "pensieve."

And so it is that the protagonist of this book, in one sense, is neither Nelson nor Fay nor any of the many far-faring men and women whose peregrinations perturb the incompletely-explored world -- it is we ourselves. We are the ones who must struggle to render meaning, must weigh and measure the value of many lives, must chart our own course through the narrative labyrinth.

And at times, along with the explorers, we too become lost. And just then, somewhere in each tale, hidden away in a box, a drawer, or a rucksack, we find the chronometer, or it finds us. With its aid, we hitch a series of rides to the ends of the earth, passing from the era of one explorer to another. Time and distance, measured in its chronometric ticks, become the same thing, and we grow accustomed to moving in quantum leaps. And finally, in the end, although confronted with both sublime and mundane explanations of it all, we're extended a curious kind of subatomic-particle possibility: that perhaps, in the novel's alternate universe, everything that is beautiful is true.


BONUS: Read our interview with the author, Ed O'Loughlin.

Posted by Russell Potter at 1:04 PM