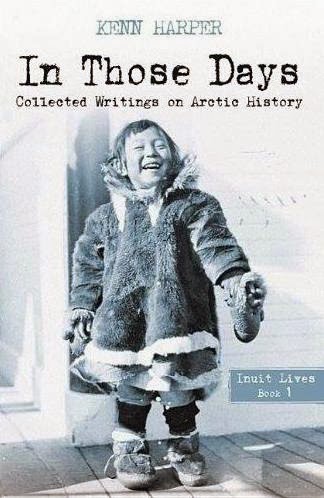 
"In those days" is the English equaivalent of Taissumani, the name of Kenn Harper's long-running history column in the Nunatsiaq News; this volume collects from among them those dealing with significant Inuit figures. Many of them will be well-known to anyone with an interest in Arctic histories: "Joe" Ebierbing and "Hannah" Tookoolito, guides and translators for Charles Francis Hall; John Sakeouse, an interpreter and artist who accompanied John Ross on his 1818 voyage to northwest Greenland; and Hans Hendrik, who worked with Elisha Kent Kane, Isaac Israel Hayes, and was part of the party who survived on an ice-floe for six months after being separated from Hall's Polaris. But these are only three of the twenty-eight  life-stories in these remarkable, turnable pages. Harper, who has lived and worked in the Arctic for half a century, tells them with clarity and grace, drawing not only from his life experiences and personal contacts but from extensive historical research. I think it's fair to say that there's no living writer with more breadth and depth of knowledge of life in the Canadian Arctic and Greenland -- and by 'life' I mean the lives lived out on the land by people for whom explorers were merely occasional visitors and (often rather demanding) guests.

The tales encompass both the tragic and the comic. We learn of Tatamigana and Alikomiak, the only Inuit ever executed by hanging in Canada; of "Prince" Pomiuk, an Inuit boy who was part of a group displayed at the World's Columbian Exposition, but who suffered physical and emotional abuse during his time among the white people, returning home only to be rejected by his own; of Nancy Columbia, whom Harper aptly dubs the 'most famous Inuk in the world,' whose career stretched from that same Columbian Exposition which gave her her name to her roles in early Hollywood films alongside Tom Mix. Many of the figures here are known due to their connections with early missionaries, especially the Moravians who established the first missions in Labrador, and from whose settlements many Inuit departed to be shown to the public for education and (more often) profit. We learn, too, of those Inuit women who experienced intimate relations with male explorers; with the apparent exception of Hall, every last one of them seems to have had one or more Inuit mistresses. Particularly affecting is the account of Aleqasina, who became Peary's mistress at the age of fifteen, who at one point had to be nursed back to health by Peary's wife Josephine. And yet, of all these tales, perhaps the most touching is that of Ruth Makpii Ipalook, who as a child survived the ill-fated Karluk expedition. That's her on the cover -- and within the book, there's a photo taken of her in 2001, eighty-eight years later -- instantly recognizeable, as her smile was still exactly the same. Throughout the terrible trials of the Karluk survivors, who had to endure the loss of their ship followed by a long trek to land with inadequate supplies, Makpii kept up her spirits and those of others. Asked by her father, "Makpii, are we going to live out the year?" she replied cheerfully "We're living now, and we're going to keep on living!"

And that's what comes across most clearly in this collection -- the extraordinary spirit of the Inuit, who survived and thrived in a region where, despite their seemingly-superior knowledge and technology, white people kept getting lost, starving, and dying. It's the same spirit evident in Minik Wallace, the subject of Mr. Harper's previous book, Give Me My Father's Body -- and, as with that volume, it's the author's frankness, compassion, and intimate knowledge of Inuit life that makes every single one of these stories resonate.

NB: The book is amply illustrated with original pictorial materials, most of them from Mr. Harper's own notable collection. Inhabit Media, the book's publisher, is located in Iqaluit, Nunavut; the book is available now in Canada, and will be published in late March in the US.

Posted by Russell Potter at 9:02 AM