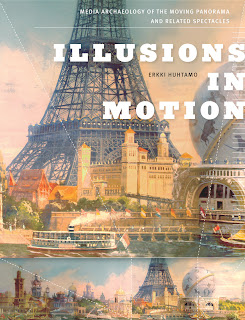 Illusions in Motion: Media Archaeology of the Moving Panorama and Related Spectacles


The paramount mass-media attraction of its era, the 'moving panorama' has, until now, received only piecemeal treatment; cast in the shadow of its larger brother, the fixed, 360-dgree panorama, it has generally been regarded as an historical side-note. There have been studies of moving panoramas of certain subjects -- such as my own Arctic Spectacles -- and some of particular regions, such as Mimi Colligan's Canvas Documentaries: Panoramic Entertainment in 19th-Century Autralia and New Zealand, but no comprehensive, international consideration of the role of moving panoramas in the history of visual culture. That is, until now: Erkki Huhtamo's Illusions in Motion not only takes up the larger histories of this medium, but documents them with an enormous number of hitherto-unseen primary-source materials. For a medium of which so few actual examples survive -- Professor Huhtamo's annotated list at the end of the book catalogs the two dozen or so known -- they left behind a vast array of supportive and descriptive materials, ranging from handbills and programmes to newspaper adverts, engravings, and sketches. Their great heyday happily coincided with that of print, and so perhaps this is to be expected -- but the problem has been that so many of these materials are classed as ephemera and poorly or incompletely collected or catalogued, that it required almost a superhuman effort to assemble them.

In many ways, this has been a collective undertaking, continued for many years by scholars such as Ralph Hyde, Scott Wilcox, and Kevin Avery, along with dedicated independent researchers, curators, and artists, such as Suzanne Wray, Peter Morelli, and Sara Velas. And yet, when all these and others gathered at one of the annual meetings of the International Panorama Council, it was always Professor Huhtamo's presentations to which we all looked forward the most keenly, knowing that they would not only contain thoughtful historical analysis, but all manner of illustrative materials most of us had never seen before.

Huhtamo has gathered a great many of these same materials for this authoritative volume, which includes more than 120 black-and-white illustrations, many of items in his own collections. He has personally examined all of the surviving panoramas, participating in the discovery and restoration of several, including the remarkable Morieux panorama from the Paris Exposition of 1900, and the Grand Moving Panorama of Pilgrim's Progress, which was recently displayed in full in Saco Maine, accompanied by a full-size copy on cloth which was performed with the original narration before rapt audiences. Having been to one of these performances myself, I can report that, when the lights were dimmed, and the narrator and accompanist wove their overlapping spells, the magic worked as well in 2013 as it had in 1851.

As a subject for a book, though, the moving panorama has two daunting aspects: the vast number of them that once were shown, and the great variety of additional techniques and apparati associated with them, many of which are very imperfectly documented, and indifferently named. From the handbills, it's often difficult to tell exactly what, for instance, a "Grand Illustrated Diorama" consisted of -- was it a panorama, a lantern-show, or some combination of the two? Some panoramas touted their use of "mechanical and chemical apparati" without specifying what they were, or used adjectives such as "Dioramic" with no clear indication of what that meant.

Huhtamo begins with one of the great enigmas of this kind: the Marshalls, a family of Scots panoramists who displayed their work in Edinburgh, Glasgow, London, and Dublin, routinely attached the word "peristrephic" -- Greek for "turning around" -- to their shows. This seems to have meant something rather different from any other such productions; at least in the purpose-built structures in Glasgow and Edinburgh, their panoramas were shown on a concave surface, with a subtle, naturalistic motion. The chief of the painted figures were nearly life-size, and there were effects such as ships coming into port or smoke emerging from painted cannons, which must have required technicians behind the scenes. Huhtamo adroitly uses the few bits of eyewitness description, along with surviving illustrations and material evidence, to solve -- as best as it ever can be solved -- this persistent mystery.

In succeeding chapters, he provides comprehensive accounts of the major manifestations of the form: the theatrical panorama, the mid-century panorama craze, the interaction and ambiguity between lantern shows and panoramas, and the final efflorescence of the medium in the late 19th and early 20th century, which saw the Poole brothers taking their "Myriorama" shows to small provincial towns in England in vans with gasoline engines. Along the way, every imaginable subject of panoramas is considered, from depictions of river and ocean travel, vertical mountain ascents, religious didacticism and Biblical subjects, to battles and fortifications. One sees here, for the first time, the deep embeddedness of the moving panorama in the culture of nineteenth-century Europe and America; its procession of sequntial imagery was linked to the deepest narrative (and ideological) sense of 'progress,' both individual and national. And, while historians of the fixed great-circle panorama have always cautioned us that they ought not to be seen merely as the progenitor of the cinema, no such caution is made, or needed here. For the translation of the collective desire for narrative into a time-based sequence of images that the moving panorama provided proved to be the essential step from illustrated but static texts into the narratives of cinema, and  later of course television.

I can think of no other single volume which both documents -- with care and precision -- and explains, with such clarity and lively engagement -- this central aspect of the visual culture of the nineteenth century.
Posted by Russell Potter at 1:15 PM