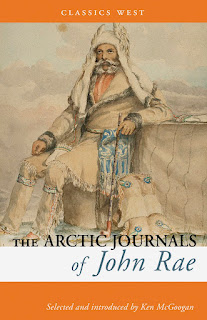 Selected and Edited by Ken McGoogan


The welcome publication of the journals of Dr. John Rae, the man who filled in the last crucial blanks in the northern coastline of North America, now fills a notable blank on the shelves of history; his is the last personal narrative of a major explorer during the search for Sir John Franklin to be published, one hundred and fifty-eight years after the latest events it recounts. There is considerable irony in the chief reason for this delay, which is doubtless that Rae searched too well, uncovering things that the British Admiralty, and large segments of the British public, would have preferred remained covered up. His accounts of Inuit testimony as to Franklin's men resorting to cannibalism shocked the sensibilities of the day, and were vociferously denied not only by Charles Dickens, but by many others in more recent times, despite the clear forensic evidence since gathered which has proved this testimony true.  Rae's own words still speak most capably in his defense, and we must be grateful to Ken McGoogan and TouchWood editions for bringing them back to us in a beautiful and compact new edition.

The format of the book, though, may be a bit confusing at first to some readers; it opens with several passages from the "lost" section of Rae's autobiography, missing from the manuscript at the Scott Polar Research Institute, then partially recovered by McGoogan in a series of extended quotations in David Murray Smith's compendium of Arctic voyages. Smith's commentary and sections of Rae's text are given together, which makes for somewhat jarring transitions between the rather pompous language of Smith, and the plain speaking of the intrepid Orcadian. There can be gleaned, however, from these pages, some items of considerable interest to the armchair Franklin searcher of today, particularly in Rae's extended comments on the paucity of wood amid the Inuit he encountered. Rae believed that this was clear evidence that they had not found either of Franklin' ships as of 1854, which would effectively date the finding of the ship at Oootjoolik to after that point; certainly by the time McClintock encountered the Inuit near Booth Point in 1859, wood was remarkably abundant.

The second, and largest section of the book contains Rae's full account, published in his lifetime, of his first Arctic expedition in 1846-47; while it of necessity contains nothing about Franklin, it is remarkable to consider how well and (for the most part) how comfortably Rae lived off the land, at the very moment when Franklin's men, holed up in their frozen ships, were contemplating that same land with fear, so dependent were they on stored provisions.

The remainder of the book contains a series of texts, including Rae's initial report, followed by Dickens's two-part attack on the credibility of Rae's witnesses, Rae's rejoinder (with Dickensian interruptions), and finally the full text of Rae's official report as reprinted in Household Words.  The astute reader may notice, the third time around, that there are a few pesky inconsistencies in these reprinted sources. As an example, Rae's original report opined that some of Franklin's men must have lived into the spring following, as "fresh bones and feathers of geese" were found (this is given accurately by Smith, and in the present volume on p. 33), whereas the typesetters at Bradbury & Evans, publishers of Household Words, mis-read this as "fish-bones and feathers," leading whole generations of Franklin researchers off on a wild fish chase (this error is faithfully reproduced in the text taken from HW on p. 301).

The general reader, happily, need not trouble over such minutae, but will benefit from this volume in two significant ways.  First, Rae's own account gives us the most vivid description of the rigors of extended journeys by boat and sledge, the longest ever undertaken with success by a single individual in this period, in the face of squalls, storms, frostbite, and terrain so rough that it wore out a brand new pair of moccasins in two hours. Second, until now there has been no readily-available and complete account in Rae's own words of the entirety of his discoveries relating to the fate of Franklin.  This new edition remedies this lack, and should have a place on the shelves of anyone interested in Arctic exploration, during the Franklin era or any other.
Posted by Russell Potter at 12:47 PM